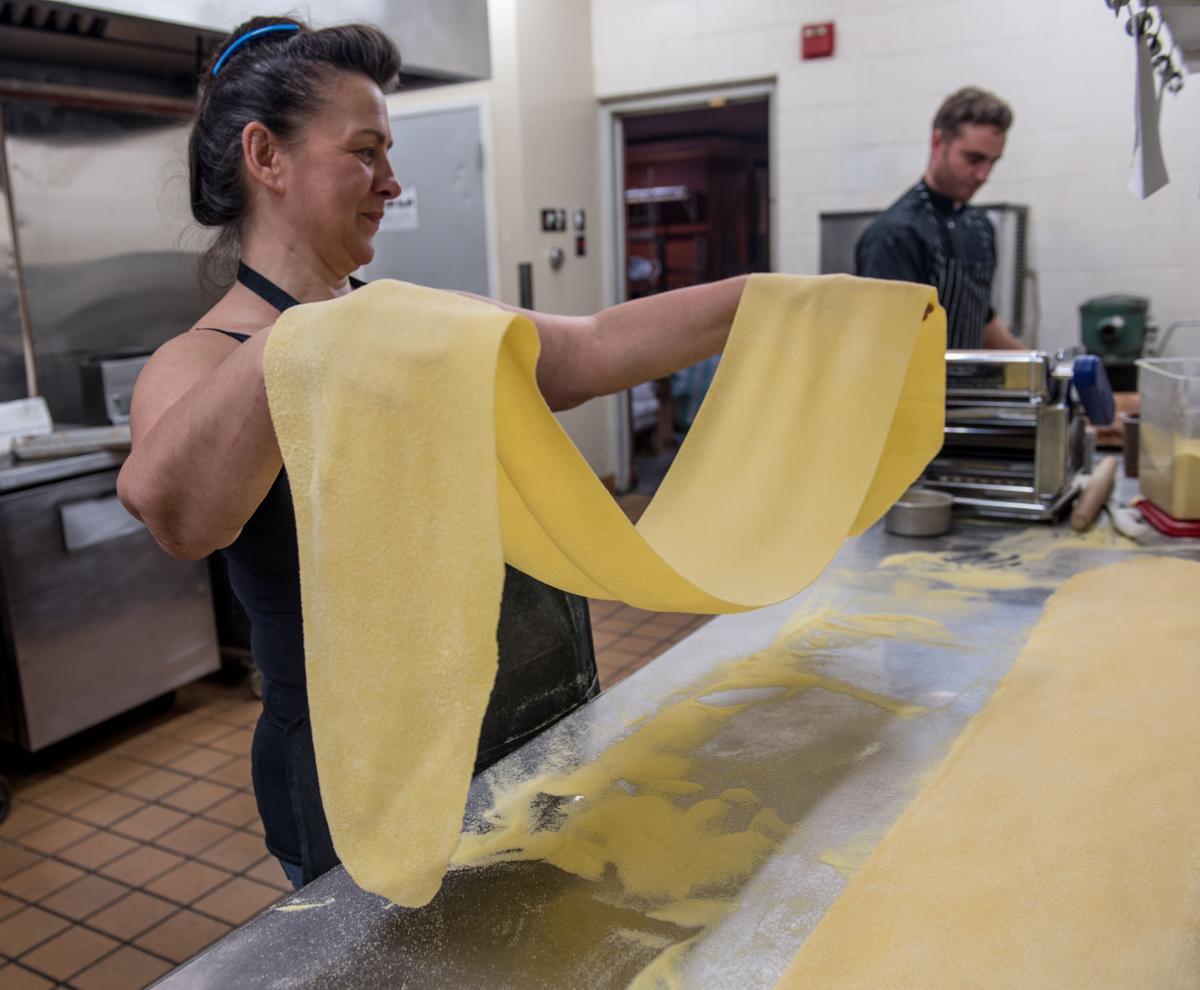 Barbara Natalini carefully handles sheets of homemade pasta which will be cut into thin strips for fettuccine. 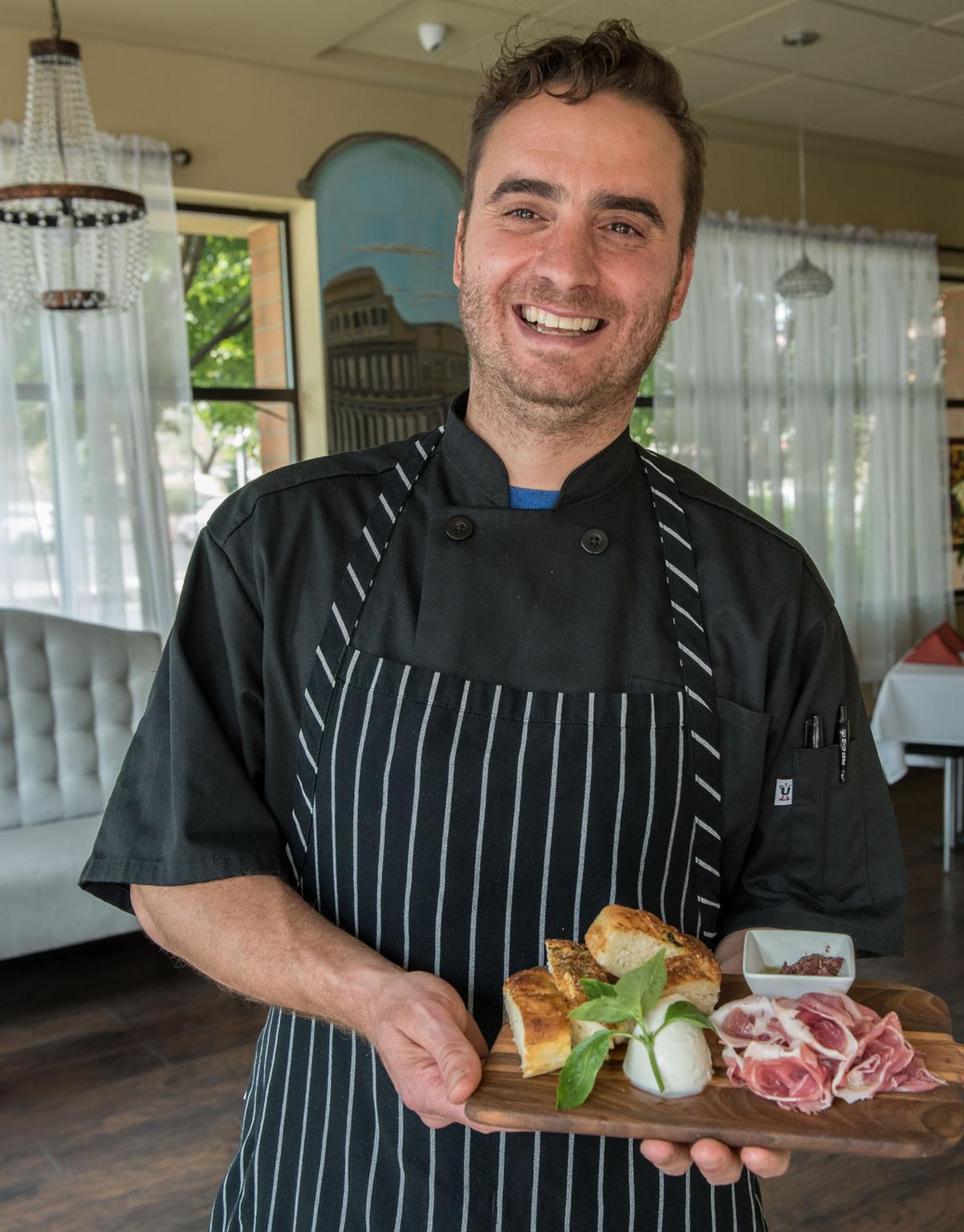 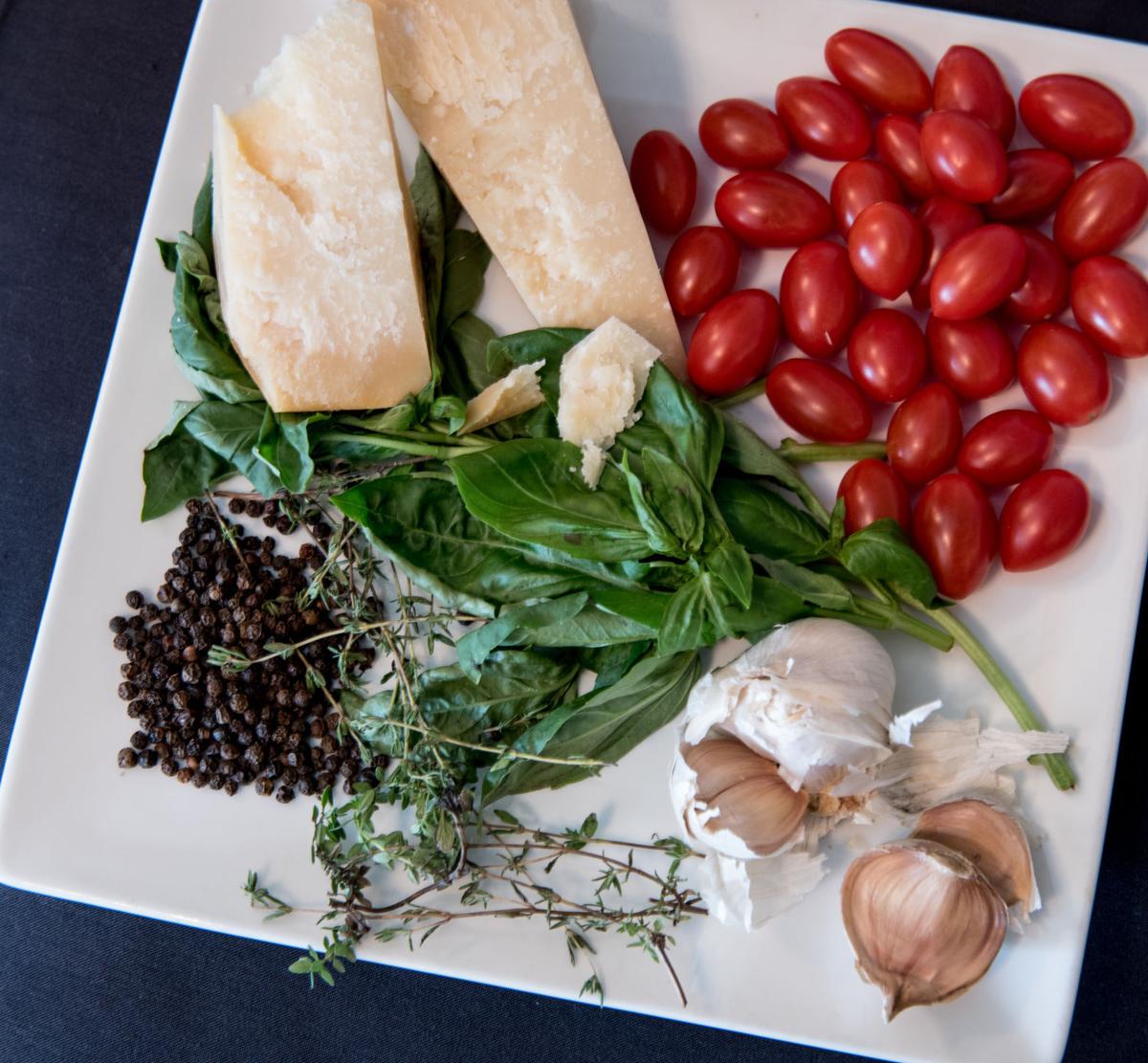 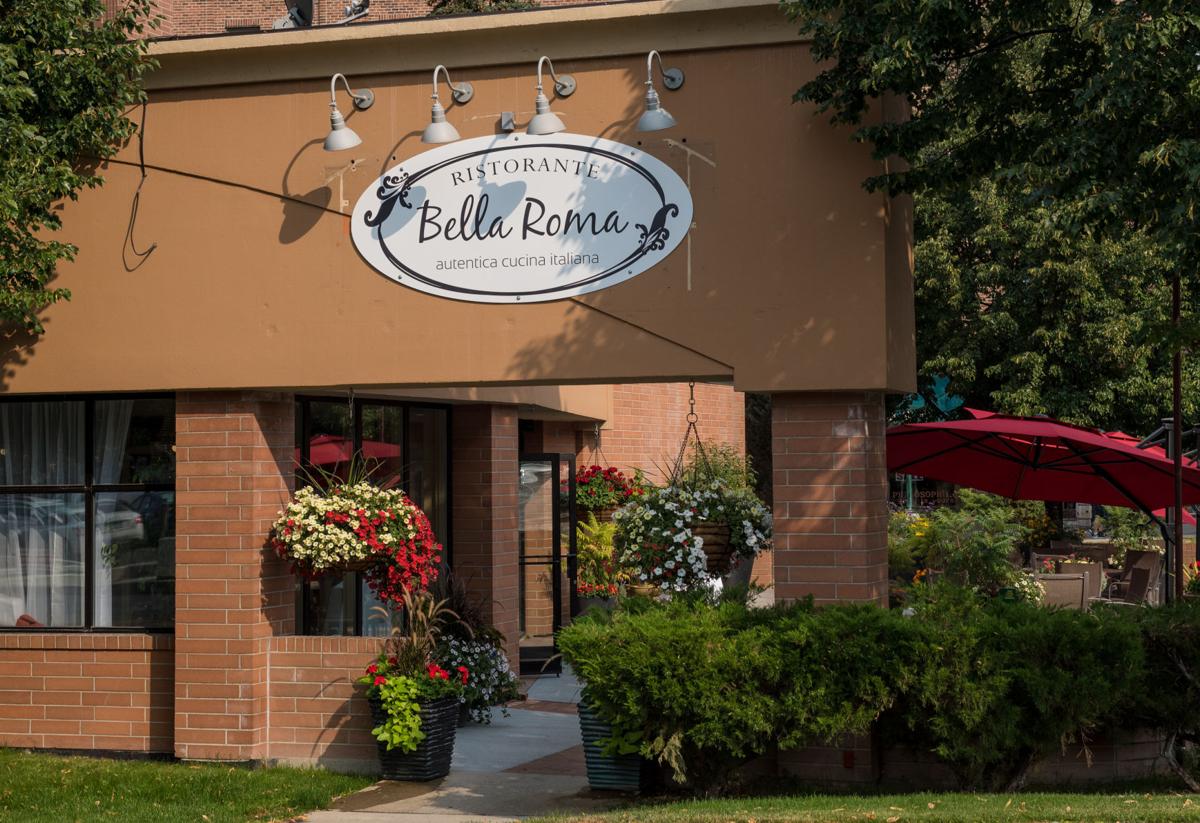 Bella Roma, along the pedestrian stroll of Last Chance Gulch. 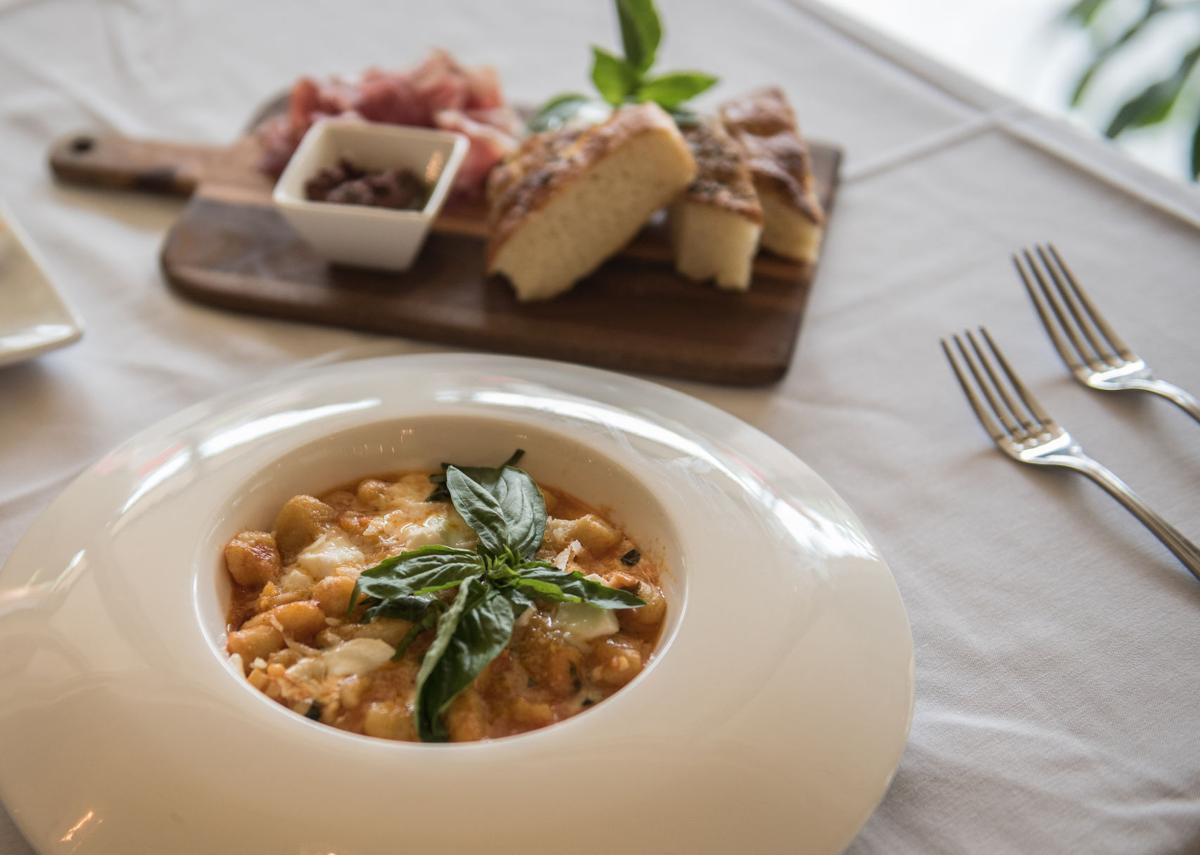 Bella Roma's Gnocchi alla Sorrentina is time-consuming to make, with homemade dumplings and tomato sauce, but so worth the effort. 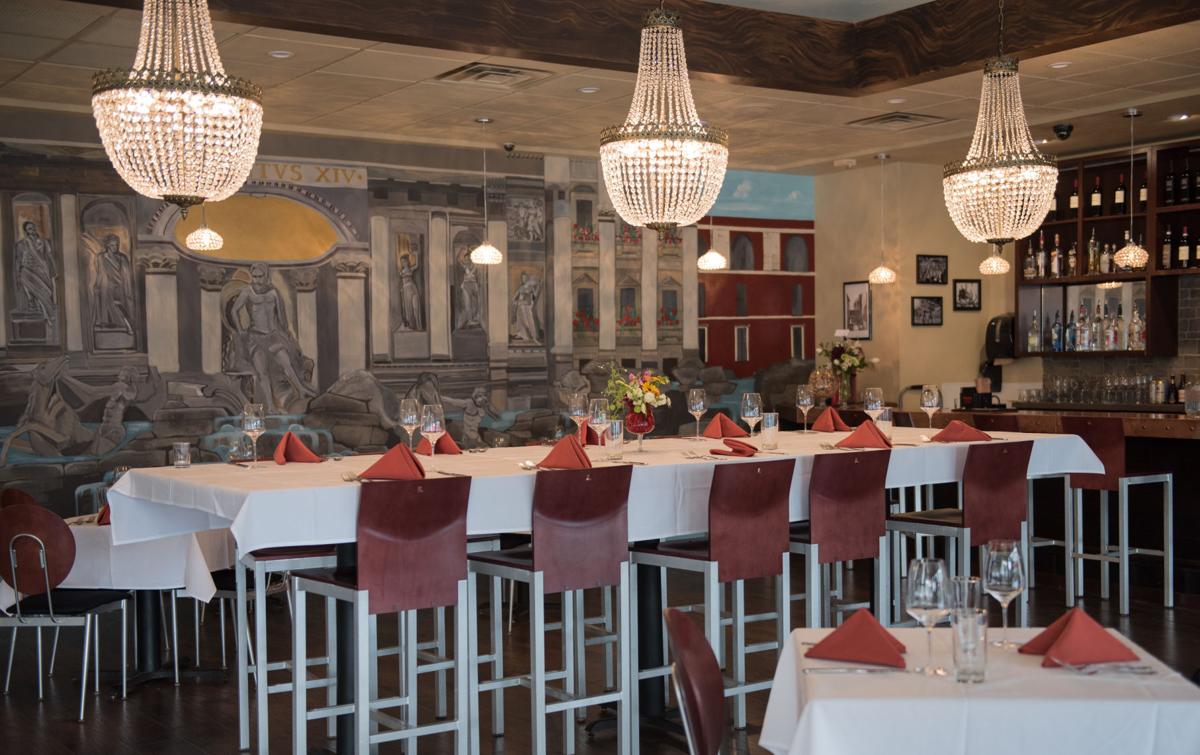 The interior of Bella Roma features a hand-painted mural of the Fontana di Trevi in Rome. 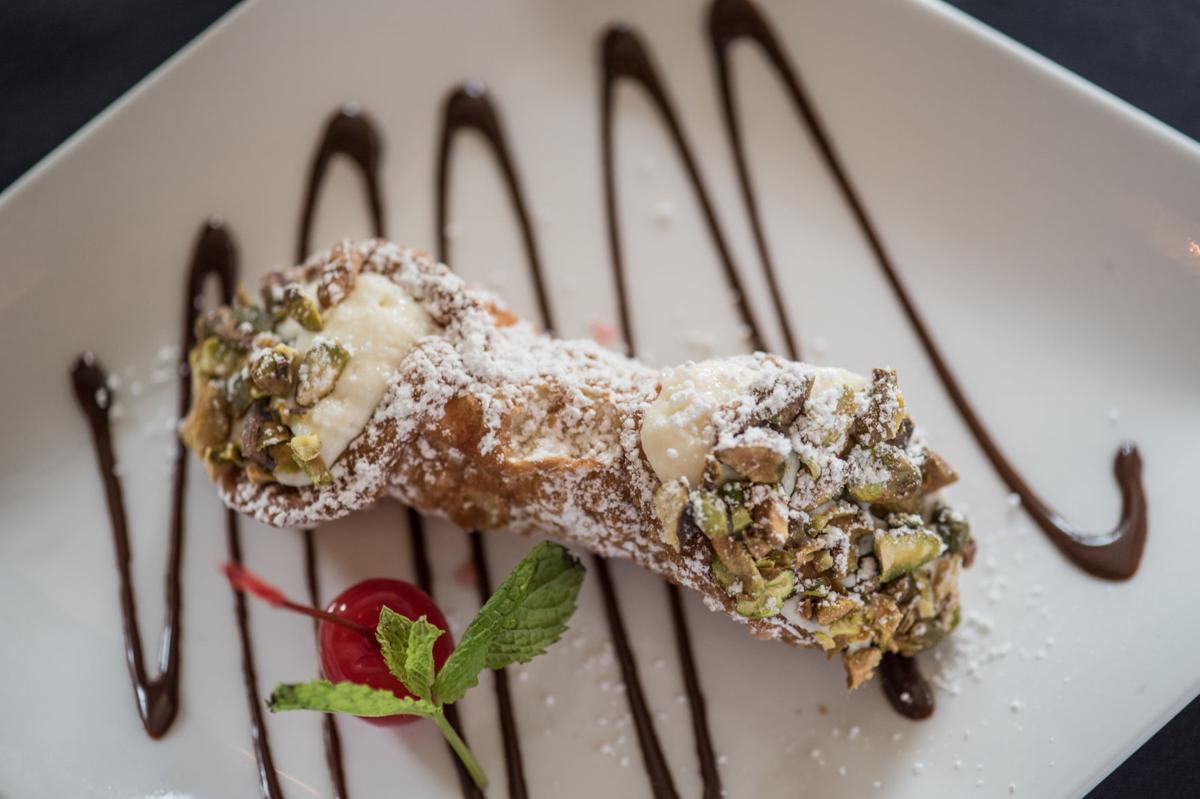 Chef Davide Giuliani's signature dessert is a homemade crispy cannoli stuffed with ricotta, pistachios and chocolate morsels. It pairs nicely with a glass of Frasanto Donini. 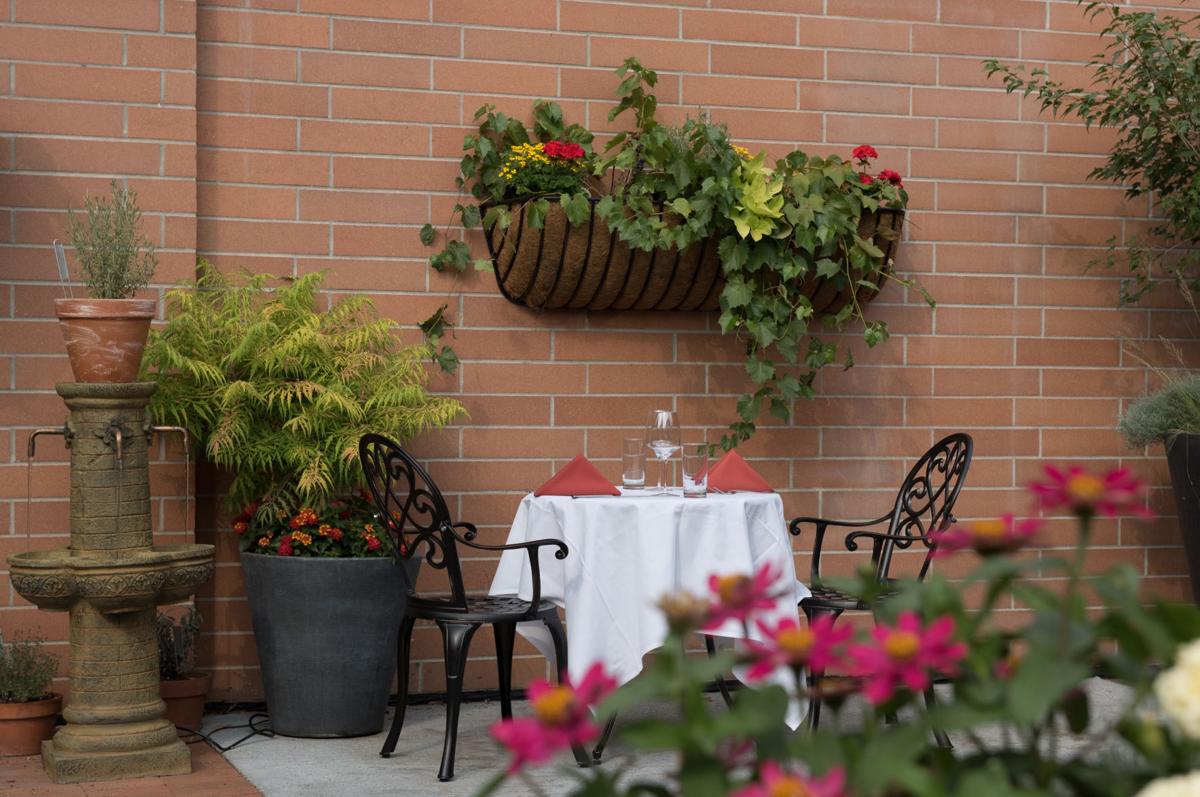 During the warm season, Bella Roma's patio is transformed into a garden-like setting complete with a small fountain. 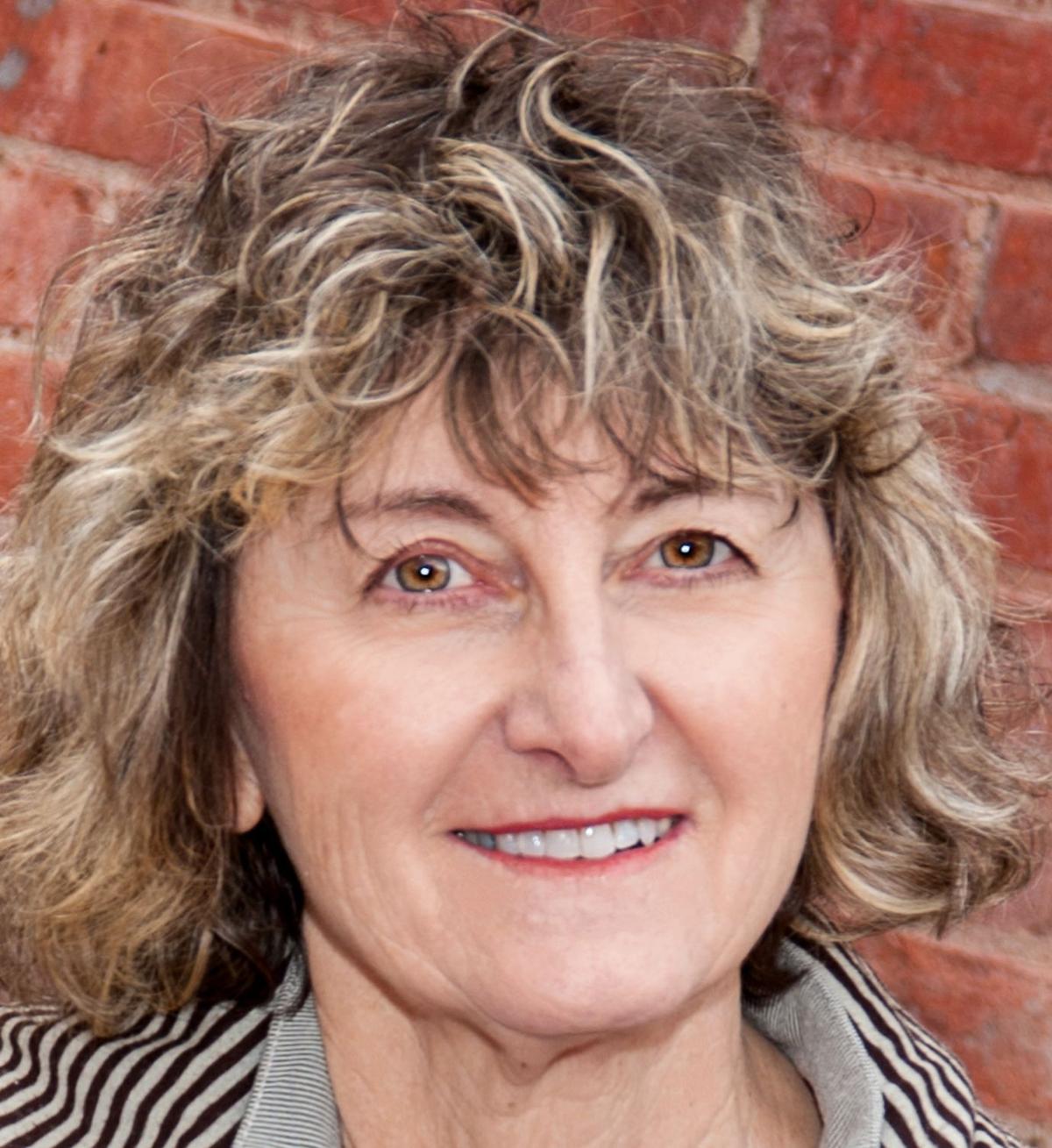 Helena’s historic Last Chance Gulch, where four miners struck gold in 1864, has yet another gem for all to savor with the opening of Ristorante Bella Roma. Located in what is currently the Helena Hotel adjacent to Broadway Street, Bella Roma is a dream come true for owner Davide Giuliani.

Davide grew up in Rome watching his mother and grandmother at work in the kitchen, getting a belly full of good food, and eventually learning to cook for himself. Ever since he was a young boy, he had dreamed of one day owning a restaurant.

The path to his dream has taken many twists and turns, but today, his accomplishment in creating Bella Roma is a windfall for anyone who loves genuine Italian fare.

While living in Rome, Davide went to pastry and culinary school, as well as earning his sommelier certification. At one point, he owned a wine bar.

While on a holiday in Las Vegas, a young woman named Tina asked Davide for a dance and clearly stole his heart. Tina came to visit him in Rome a few times. They married, and found themselves working in Los Angeles, San Francisco and Seattle before moving to Helena, Tina’s hometown.

Davide discloses that it was a scary time for him, being in the United States, not speaking English, not knowing which direction his path was heading and being homesick for his beloved Rome.

But life has a way of working out, and today, he stands with great pride in the middle of the charming Italian restaurant that he has crafted.

I’ve been transported to Italy by the smells in the kitchen. Davide’s mother Barbara Natalini, who has immigrated to the United States, is hard at work rolling out freshly made pasta sheets.

Sous chefs Angie Jackson and Matt Allgood are chopping vegetables and preparing sauces. Two large pans of focaccia are coming out of the oven steaming hot.

Out front, the bartender is adjusting his tie and servers are readying the tables. The vibe at Bella Roma is pulsating, in preparation for a house full of guests feasting on superb cuisine.

Davide has prepared gnocchi for me to sample. I take my time with it, savoring every delicious bite. I’m reminded that eating food prepared with great care and love is a privilege.

Liam Watson, who has been fussing with the tables, approaches me as I finish the last bite and prepare to dig into the cannoli that has been placed in front of me. "I overheard you talking to Davide," he said. "I love this place because of him. He has so much pride and he does everything so well. I’ve worked at several places in town, but this is the best."

I ask if he is a server and he grins at me. "Yes," he says,  "but I’ve appointed myself floor manager until Davide tells me differently."

In typical Italian fashion, meals aren’t meant to be rushed. The average dinner at Bella Roma takes about two hours, enough time to savor all the courses.

Davide will say he gets frustrated when the hot dishes are presented to customers and they are busy talking and let the food cool off. It’s meant to be eaten hot, he says. I want to go up to them and tell them to please EAT now.

Bella Roma’s four-course dinners are priced at $45/person and include an appetizer, salad, main course and dessert. A few of the choices, such as fettucine with lobster tail, have a small upcharge over the set price. It’s possible to order any dish a la carte as well. There is also a limited bar menu that pairs well with an assortment of imported European beers. Carefully selected Italian wines, as well as a full array of cocktails, are available.

Everything on the menu is made from scratch, with some ingredients imported from Italy, including the prosciutto, bresaola, parmigiano reggiano from Parma and extra virgin olive oil.

Helena’s historic gulch has come a long way from the days of gold miners prying open a can of beans or chewing on dried meat. Today it’s possible to feast on jumbo shrimp topped with a salmoriglio sauce, or veal scaloppine layered with fresh sage and prosciutto di Parma.

Options for seating include the light and airy Rome-themed dining room, or enjoy a patio laden with summer blooms during the warm season. Bella Roma is open Tuesday-Saturday, 5 pm till closing, with reservations suggested on the weekends.

Rinse the whole potatoes, do not cut. Bring a large pot of water to a boil, enough water to cover the potatoes. Add salt to the water (about 2 tablespoons). Boil 35 to 40 minutes. Check potatoes with a toothpick to see if they are cooked through. Drain and let potatoes cool until you are able to remove the skins. After removing all potato skins mash potatoes to a smooth consistency. Add flour, salt, egg and parmigiano to the mashed potatoes. Work into a smooth dough. Flour the surface with semolina to keep dough from sticking. To form the gnocchi, cut a small piece of dough and roll into a "snake" shape about 2 to 3 centimeters in diameter. Then cut into gnocchi.

Heat a sauté pan on low heat. Add olive oil, minced garlic and basil leaves and fry on low heat. Add the tomato and salt. Reduce for 20 - 25 minutes. Once the sauce is done, cook the gnocchi in a pot of boiling water until they float on top; add sauce and parmigiano and serve.

Donnie Sexton, who recently retired from a long career with the Montana Office of Tourism, currently freelances as a travel writer and photographer, covering destinations around the world.

Tagline for TLBP (should go with logo):

The last best plates at some of Montana's local eateries

A look at COVID-era alcohol sales by the numbers

Many shopping habits and trends have emerged since the start of the coronavirus pandemic, not the least of which is a significant spike in alcohol purchases.

Barbara Natalini carefully handles sheets of homemade pasta which will be cut into thin strips for fettuccine.

Bella Roma, along the pedestrian stroll of Last Chance Gulch.

Bella Roma's Gnocchi alla Sorrentina is time-consuming to make, with homemade dumplings and tomato sauce, but so worth the effort.

The interior of Bella Roma features a hand-painted mural of the Fontana di Trevi in Rome.

Chef Davide Giuliani's signature dessert is a homemade crispy cannoli stuffed with ricotta, pistachios and chocolate morsels. It pairs nicely with a glass of Frasanto Donini.

During the warm season, Bella Roma's patio is transformed into a garden-like setting complete with a small fountain.