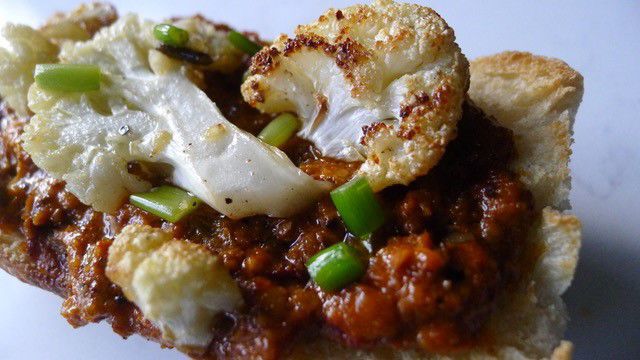 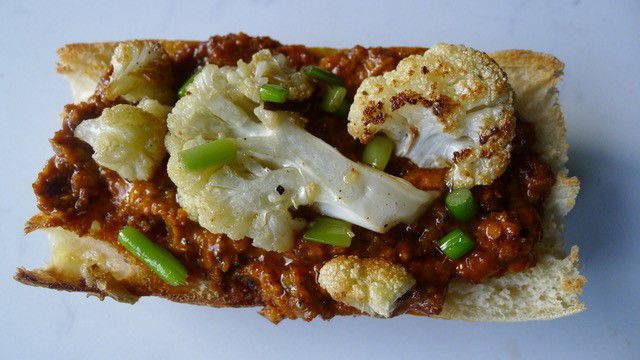 Mexican romesco is perfect served with savory goodness, such as crusty bread and roasted cauliflower.

Romesco sauce, one of Catalonia's finest exports, is renowned as a dressing for seafood. But the red, nutty condiment improves almost any savory dish it touches, including vegetables, starches and proteins of all persuasions. Invented by fishermen centuries ago, soon after the arrival of New World tomatoes and peppers, it also includes almonds, olive oil, garlic, wine vinegar and stale bread. Every one of those ingredients has been in ready supply in California for years, as has been romesco sauce.

The appearance of Mexican romesco was inevitable.

One celebrated formulation debuted soon after Napa Valley restaurateur Cindy Pawlcyn hired the Jacinto brothers, Ernest and Pablo, to run the kitchen of Mustard’s Grill. Their South-of-the-border version of the Catalonian sauce was on the menu for years, and was revered valley-wide.

The modification from Spanish to Mexican romesco is slight, but significant: dried red chile instead of fresh red bell pepper. This change thickens the romesco, adding pungency and spice. "Everything else in the sauce comes from Spain," explained my friend Marianne Forest, who learned the recipe from Pawlcyn.

A restaurateur herself, now a caterer, teacher and operator of the occasional culinary speakeasy, Marianne was a food legend in turn-of-the-millennium Missoula, when I showed up. I used to do homework at the Hob Nob, which Marianne started in the back of the Union Club, before selling the business to her chef, Jason Alterowitz. Her tenure at the helm of Marianne’s at the Wilma, the most upscale restaurant in Missoula at the time, cemented Marianne’s one-name status in the food community. Accordingly, I was thrilled when she agreed to come to my house and show me how to make Jacinto-style romesco.

Stately, with silvery blond hair and a bright, sharp gaze, Marianne was at home in a foreign kitchen like mine. When the time came to cut a tomato, she reached smoothly into the jungle of utensils at the edge of my counter and extracted my only tomato knife, as if pulling a rabbit from a hat. She used the serrated blade to cut a cross on top of each tomato.

Soon those cuts would help the skins slip off easily, after the tomatoes were broiled and then cooled. In the meantime, almonds would be roasted, a hunk of sourdough would be grilled, and heads of garlic baked in olive oil. "Everything is roasted or toasted," Marianne said.

Marianne put the ingredients in the blender in no particular order, noting, "This isn't some French classic sauce where one thing depends on the next."

Every few moments she would inspect the slurry with a spoon, gauging progress by the diminishing diameter of the largest pieces of almond. "You don't want a thin, emulsified sauce," Marianne cautioned. "You want rustic saucery. It should not be homogenous, or liquefied."

Before I knew it, we were eating crunchy romesco sauce. It was delicious and complete off the spoon, with a vibrant mix of full flavors. The differences in almond chunk size add intrigue, and a feeling that you are eating something from a time before we had machines that could make everything smooth, when you actually had to peel the tomatoes.

Per Marianne's advice, I smeared romesco on a piece of crusty toast soaked in olive oil. This simple combination could be a complete meal, but is also a starting point, and a crossroads. Atop that romesco-smeared toast there remained room for additional morsels of food, like grilled asparagus, roasted cauliflower, or a few leaves of spicy greens.

Since then I have noticed a pattern: when bread and romesco sauce are both within reach, I will keep eating until one of them runs out. The same is true when I’m dipping veggies in romesco. And when all available substrates are gone, there is still that spoon.

The original recipe contains toasted bread. As a gluten-free alternative, Marianne suggested adding extra almonds and skipping the bread. I tried that and preferred that version, especially when gluttonously smeared on a glutenous hunk of toasted sourdough.

Romesco Jacinto was made with whole dried chile pods, but since chile powder makes a decent batch too, and is easier to get, the directions call for powder.

If you wish to use whole dried chile, find a variety with the right balance of heat and flavor for your taste. Marianne likes New Mexico and ancho peppers. Use two good-sized pods. Remove the seeds, toast in a pan, and soak in water to rehydrate.

One ¾-lb tomato (or a collection of smaller tomatoes)

One large head of garlic, separated into cloves and peeled

2 tablespoons red chile powder (a variety, or mix, that delivers a heat level you can handle)

Optional: a piece of white bread

Turn the oven to broil. Cut an X on the top of the tomatoes, with the stem scab right in the middle, and place them six inches below the flame. Leave there until you smell something faintly starting to burn, about 10-15 minutes — start paying close attention after 10. When the peels start to dry and even char, turn the tomatoes over and cook similarly.

While the tomatoes are broiling, pour ½ cup of the olive oil into a small baking dish and add garlic cloves. When the tomatoes are charred on both sides, remove them, turn the oven temperature to 300 degrees on bake setting, and put the pan of garlic and oil in the oven. Bake at 300 for 20 minutes. Turn off the heat and leave in the oven to cool.

While the garlic roasts, toast the almonds in a dry, thick-bottomed pan on medium-high. Just a few nearly burnt almonds gives the sauce a rustic flavor, but it should not taste burnt. If using bread, pan-fry it in olive oil to slightly brown.

Serve at room temperature with anything savory, like grilled or roasted vegetables, scrambled eggs, and/or that crusty, oily piece of bread.

Rich, creamy chowder — with a twist

The only thing that comes close to the flavor of a wild mushroom is a cultivated mushroom. Even the most common varieties, like buttons and cr…

Taste the lime, smell the roses with this smooth summer cocktail

Summer in Montana doesn’t reliably start until July Fourth. Then, the scramble begins in earnest to squeeze as much joy from the long hot days…

You'll love this chocolate treat with a twist

If nobody told you it was half root crops, you’d simply think it was a magnificent chocolate torte, moist like a rainforest, rich like a truff…

Think outside the salad: Radishes punch up multitude of dishes

A radish can send mixed messages. Many varieties resemble something designed by Willy Wonka, but taste like mustard gas. Eating one can feel l…

This time of year, with the appearance of a green shoot inside every clove, the biology of garlic becomes impossible to ignore. That verdant c…

Stuff yourself with these handmade Iraqi dolmas

In a mint green mobile home adorned with American flags and Easter eggs, a pot of Mosulian dolmas rested on a stovetop, swaddled in towels.

Pucker up to this summery rhubarb salad

During the heyday of the Silk Road — the actual road, not the former Missoula restaurant — dried rhubarb root could be more expensive than cin…

'Just right' porridge recipe will power you through your day

The fruit parade of summer can leave a cook like me searching for ways to use it all. The procession of strawberries, blueberries, raspberries…

Getting Vichy with it; Cauliflower in place of potato in a classic soup

A cauliflower stem is not celebrated like the floral crown it supports. Despite having the same flavor as the florets, and similar nutritional…

At an overpriced tapas joint in Boulder, I took a chance on charred cucumber salad. The dish sounded counter-intuitive, to put it delicately, …

I learned most of what I know about salsa from a used car salesman. That may sound sketchy, but Roy had already given me a great deal on a Sub…

About three years ago, packages of Taco Bell verde sauce quietly disappeared from the chain’s condiment counters. Those treasured pouches of t…

How to have a cozy quarantine home this winter

Mexican romesco is perfect served with savory goodness, such as crusty bread and roasted cauliflower.