GUAJAR ALTO, Spain — The Spanish state of emergency was to go into effect at midnight. At the only restaurant in the Toba valley, some folks had gathered for a birthday party. The television was blasting scenes of COVID-19 panic in Madrid, but nobody was paying attention to it, or to the steady march of the virus.

There are three villages in the Valle de Toba. They share the name Guajar. We were staying in Guajar Faraguit, in the middle. Carmen’s was up in Guajar Alto. I never made it to Guajar Fundo, down below.

On a normal night, Carmen’s feels like an eatery from a different century. There is a flask of wine and a pitcher of water on the table. She asks what you want to drink, and what kind of meat. Then comes an onslaught of food.

The secret of the Iberians

The salad is a mound of lettuce topped with fresh raw veggies drizzled with pomegranate dressing. Then, a vat of soup and a stack of bowls. My favorites soups were cocido de hinojos, made with fennel and white beans; sopa de mariscos, a seafood soup thick with mussels, clams, squid and fish; and salmorejo, a cold, pureed gazpacho.

After soup comes a skillet of papas alins, potatoes cooked in sherry and olive oil. Decadently soft, impregnated with oil, so totally edible, the average diner is full before the meat arrives. The hearty goat stew, flavored with liver, the chicken with Dijon turmeric sauce, and the broiled rabbit, which tastes like chicken, were all delicious. My favorite was the lamb, salted and grilled.

Finally comes dessert, usually natillas, or an avocado mousse that tastes like vanilla custard with your eyes closed.

My last taste of Carmen’s food was takeout we ate on the roof in Guajar Faraguit. Carmen had packed my food in plastic containers, and a liter soda bottle with wine.

The next morning the state of emergency was declared, and we wondered how it would be, exactly. That night, I drove up to Guajar Alto to return the dishes. The restaurant seemed more festive than usual. On the television, the shoppers were more frantic than usual, but nobody cared about that. Carmen’s sister-in-law was more dressed up than usual. It was a party.

Some motorcycles roared to a stop outside, and the young women sprinted out, returning a few minutes later with boxes. An octopus-like cake holder appeared on the table, and soon each ornate arm held a cake.

Like the cakes, many of the guests had come from outside the valley. The birthday girl posed with them in front of the cake rack, in front of the flashing screen. As she kissed her mother, I had a dark feeling, scared to be witnessing a possible matricide.

The next day we took a secret hike along an ancient road above the valley. Carmen’s was shuttered. Los Guajares were silent.

The shops were closed. People kept their distance on the near-empty sidewalks as if scared of being mugged. We were stopped by the police on grocery runs. One shopper at a time was allowed in each store. I had my money sprayed with bleach after paying.

Many locals were waiting out the epidemic in their mountain huts, next to olive groves where there is always work to do. We saw them in our hikes and runs, weeding onions, hauling avocados. I’ve been in the kitchen, trying to recreate Carmen’s cooking. This summer, we’ll discuss avocado mousse and salmorejo. When the fennel is in our faces, we’ll make cocido de hinojos. But now, as we are holed up, hopefully with a sack of potatoes, papas alins are what we need to be eating. We have the ingredients and they will make us happy.

This is my very own personal version of the recipe, and not the official one, or Carmen’s. I started making it my way before I realized I was supposed to use sherry, and then I couldn’t find sherry in the valley. You can find the official version of this dish on the computer. I will say that my style is a lot like Carmen’s.

Heat the oil on low/medium, add the potatoes, and let them slowly poach at a gentle simmer. If they stick above the oil a bit it’s OK, because soon they will soften, shrink and sink.

Unlike when cooking fries, where sogginess means failure, here we want the oil to impregnate the soft potatoes. But if you cook them long enough a crust will form that serves to hold in the flavored oils. It’s not authentic, but it’s a nice touch.

After about 10 minutes add the peppers, garlic and any other veggies you might care to. Move things around so the new veggies are submerged, and keep simmering until the peppers shrink and the air smells like a fragrant mix of potatoes and peppers. Strain the oil. Toss on paper towel to remove more if you care to. Serve with something green.

Take the mystery out of cooking any meat

Forced to leave Spain, but not without his jamon

About halfway through our family trip to Andalusia, the United States restricted air travel from Europe, and Spain declared a state of emergen…

Sheltering in place? You've got time for bean soup

Like most of you, I have been sheltering in place for what feels like ever. My house arrest began in mid-March, in Spain, when the prime minis…

Finding your own food network in the time of coronavirus

For numerous virus-related reasons, many are looking to take a more active role in their food supply chains. 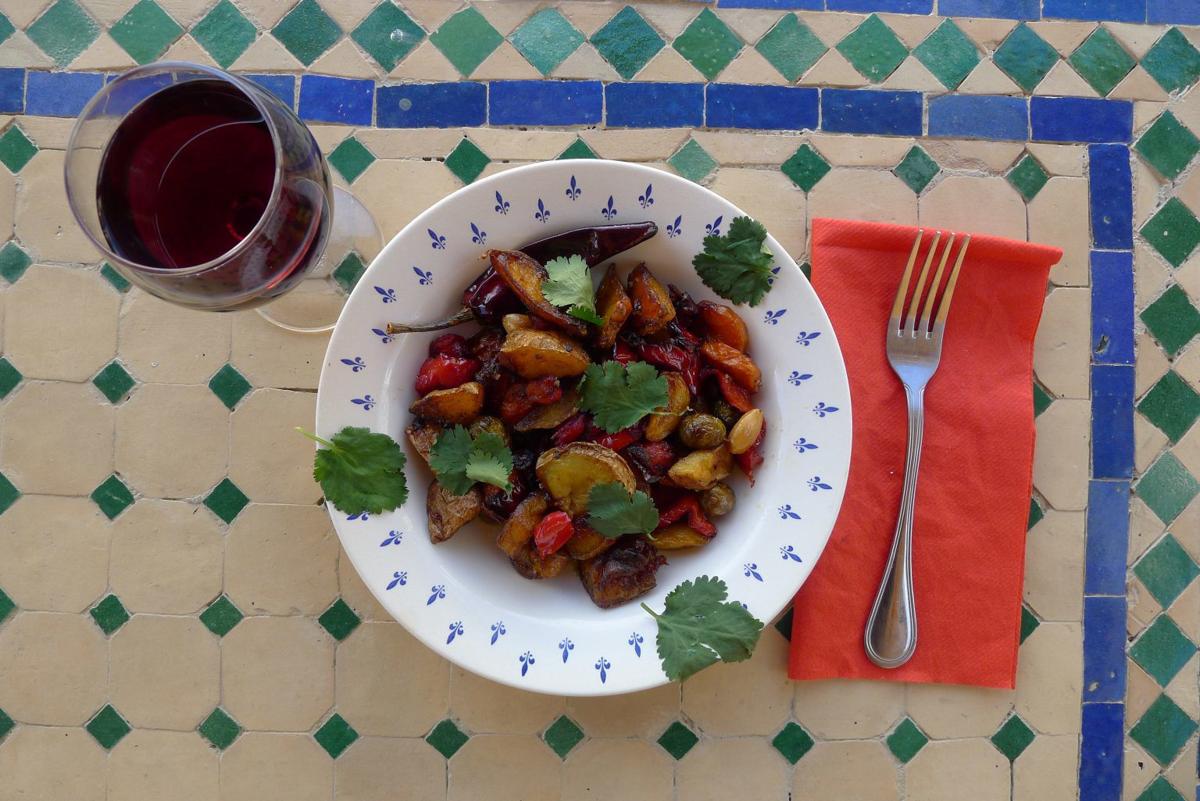 Papas alins, potatoes cooked in sherry and olive oil, are ecadently soft and impregnated with oil, so incredibly edible that the average diner waves the white flag before the skillet is half empty if they don’t pace themselves.