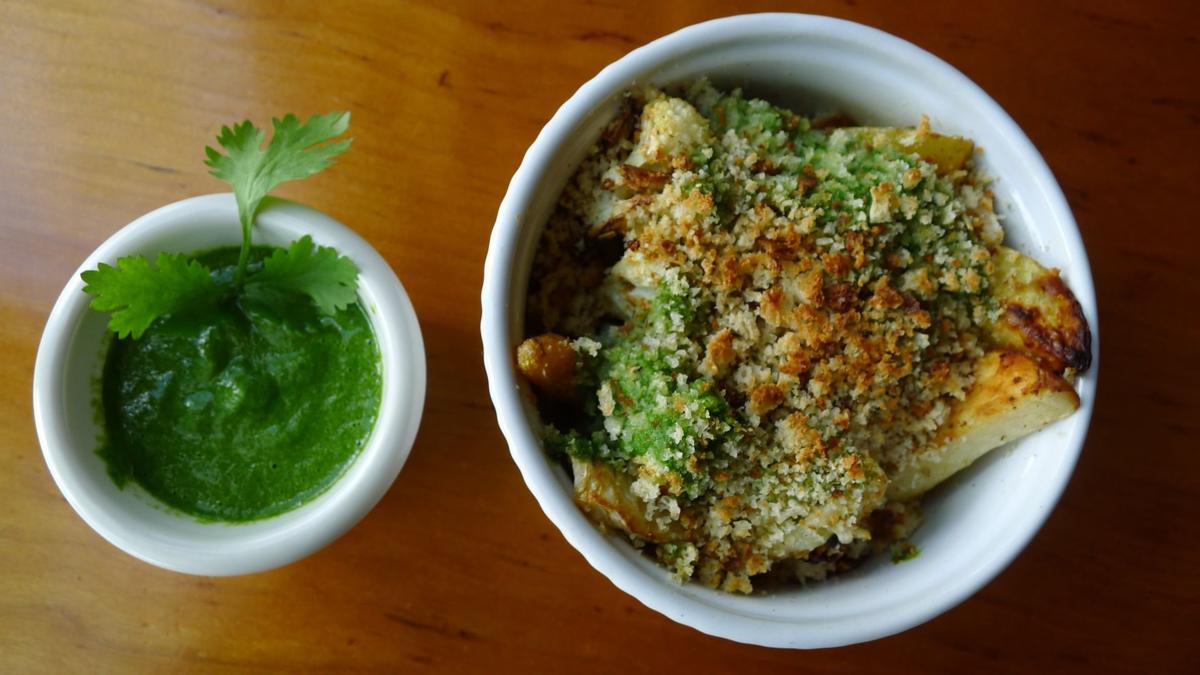 The herb-based verde of the Old Country and the nightshade-based American verdes collide in Biga Pizza’s verde pizza sauce. 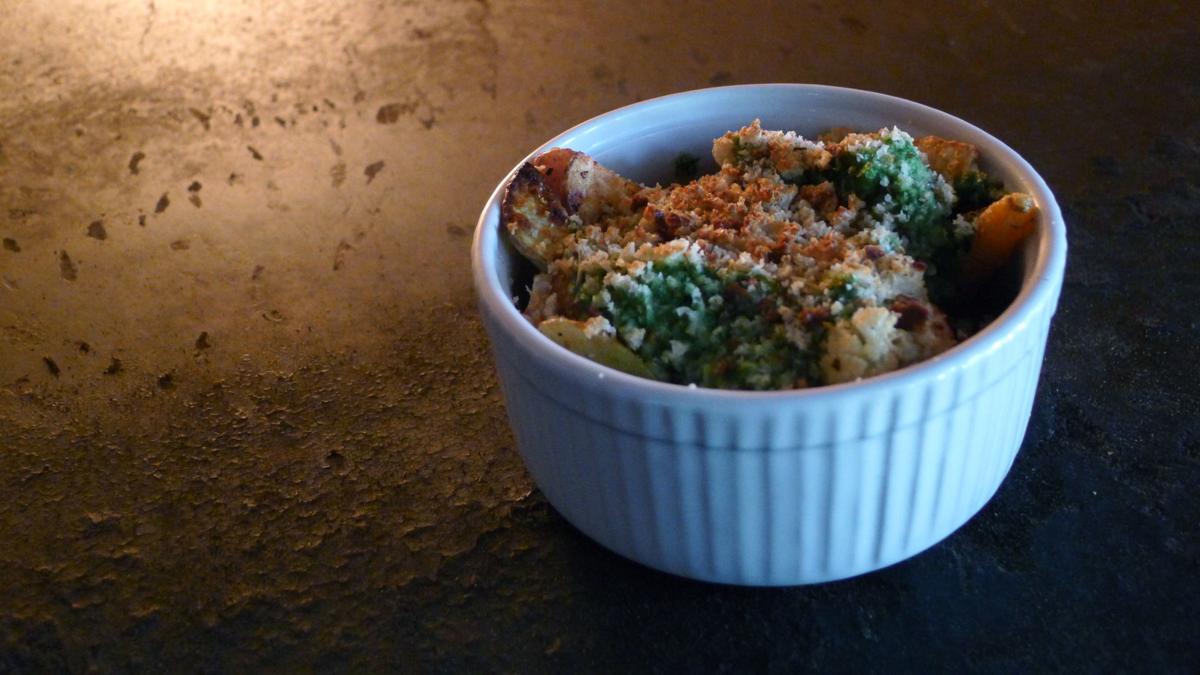 This verde sauce includes both cilantro and jalapeno. Cilantro haters can substitute parsley.

About three years ago, packages of Taco Bell verde sauce quietly disappeared from the chain’s condiment counters. Those treasured pouches of tomatillo tang had been discontinued in order to make way for Diablo Sauce, but that mattered not to the victims. Despite protests, petitions and all forms of unrest, the Taco Bell Verde has not returned.

In Missoula, at least, we have a homegrown source of green sauce, thanks to the Meatball Verde pie served at Biga Pizza. And luckily for all of us, I’m here to tell you how to make it.

Verde means “green” in the Latin-based languages, and a sauce by that name appears nearly everywhere those tongues are spoken. Verde sauce — or vert, verte, as the case may be — is made from whatever ingredients are available, providing they are green, and presumably tasty. In keeping it green we are limited to ingredients that contain chlorophyll, which isn't much of a limitation at all. The verde at Biga comes from jalapeño peppers and cilantro, rather than tomatillos, a la Taco Bell. But those are but two of many shades of verde.

In Spain, France and Italy, verde is typically made with parsley. That practice made it across the pond to the south of South America, where the parsley-based verde known as chimichurri included a New World plant known as the chile pepper.

In the American Southwest, you can distinguish Mexican vs. New Mexican restaurants by the little bowl of verde sauce that comes with the obligatory basket of corn chips. While Mexican verde is powered by tomatillo, New Mexican green, as the locals call it, packs the fiery musk of roasted green chile — which ultimately comes from Mexico, too.

The herb-based verde of the Old Country and the nightshade-based American verdes collide in Biga’s verde pizza sauce. With both herbs and peppers, Biga verde sauce it is a blend of Old- and New-World sauce-ology.

But Biga chef/owner Bob Marshall isn’t consciously tapping into any of this history. “I just wanted to make a taco pizza,” he says, of the pie that will be on the summer menu for about another month.

There is another shade of green on the pizza as well. Marshall adds chopped broccoli rabe to the pizza, the mild, tender leaves and stems of which melt into the verde sauce.

The potent bouquet of cilantro is balanced by equally assertive jalapeno, garlic and vinegar, resulting in a bright sauce that creates magic in your mouth as you eat.

With his name and cooking chops, Marshall could have been the most legendary Montana hunting camp cook of a generation, but instead he took his talents to the pizza space, knowledge of which he brought with him from his native New Jersey. Biga has been busy since 2006, when Marshall first fired up his 600-degree oven.

Marshall was kind enough to show me his verde recipe, as well as a simple way of using the Biga green for those of us without pizza ovens. The only limitation was that there would be no boiling, as that oven is the only source of heat in the entire kitchen. He decided on roasted roots, tossed with breadcrumbs and verde, baked into a gratin.

This was the kitchen of Biga Pizza, after all, and nothing makes it out of there without at least a kiss of crust. “Biga” is an Italian word that refers to the starter from yesterday's dough, a little of which is added each morning to the new day’s batch. This practice results in a “deeper, more complex flavor,” Marshall says, than pizza dough made with yeast.

“You could make an argument that we are a bakery,” he says. “We make 300 pounds of dough every day.”

Soon, potatoes, cauliflower and carrots roasted in the oven, as Marshall got to work converting a house-made focaccia into breadcrumbs.

When the bread crumbs were browned and the roots roasted, Marshall did the easy part. He made a batch of verde in a Vitamix, which took less than five minutes. He then assembled a ramekin of gratin and set it in the oven.

I brought the leftover verde home, where I proceeded to put it on everything, often with cheese. From salad to eggs to mayonnaise, I experimented with great green pleasure until it was gone.

2 cups cauliflower, separated into florets about an inch across

Optional: proteins, such as cheese, meat or mushrooms

Soak the cut potatoes for 30 minutes in water, and drain. Toss the carrots, cauliflower and potatoes in olive oil, salt and pepper, and spread out evenly on the pan, filling all space. Bake at 450 until everything is golden, soft and puffy. Don't stir.

When the roots are still warm but cool enough to work with, toss them with the crumbs, and then lightly toss in the verde and optional proteins, but don’t totally mix it up. There should be patches of unmixed, non-green roots, as well as dense areas of solid green. Spoon this mix into ramekins and bake until the top develops a crust.

We know the verde belongs on tacos and pizza, but this sauce can do almost anything. It’s a great finishing sauce, dip, marinade and dressing. Just don't overdo it, as a little goes a long way. Cilantro haters and skeptics should substitute parsley.

¾ pound cilantro, including stems as long as they are not too woody

Put the sliced jalapeños and onions in the rice vinegar first, ideally a few hours or a few days before making the verde. This allows the onions and jalapeños to pickle.

When it’s time to make the verde, add this pickled mixture, including the vinegar, to a blender with the rest of the ingredients, and blend until smooth. A batch of verde will last up to a week, well-sealed in the fridge. But the concept of verde will never die.

Romesco sauce, one of Catalonia's finest exports, is renowned as a dressing for seafood. But the red, nutty condiment improves almost any savo…

'Just right' porridge recipe will power you through your day

The fruit parade of summer can leave a cook like me searching for ways to use it all. The procession of strawberries, blueberries, raspberries…

Getting Vichy with it; Cauliflower in place of potato in a classic soup

A cauliflower stem is not celebrated like the floral crown it supports. Despite having the same flavor as the florets, and similar nutritional…

At an overpriced tapas joint in Boulder, I took a chance on charred cucumber salad. The dish sounded counter-intuitive, to put it delicately, …

I learned most of what I know about salsa from a used car salesman. That may sound sketchy, but Roy had already given me a great deal on a Sub…

Adventures in summer squash: Everything but the roots

When Americans get excited about squash, it isn't usually for the stems. We eat the fruits — thin-skinned zucchini or hardened winter squashes…

That's a wrap! A dish for everyone to love

When I was a teenage prep cook, I made a special dish that never made it onto the menu, even as a special, even though it was called the Ari Special.

An eggplant dish that is intoxicatingly delicious

"Imam Bayildi" is a Turkish baked eggplant, named and famed for its ability to knock out a grown man. Its name translates to "the imam fainted…

How to have a cozy quarantine home this winter

The herb-based verde of the Old Country and the nightshade-based American verdes collide in Biga Pizza’s verde pizza sauce.

This verde sauce includes both cilantro and jalapeno. Cilantro haters can substitute parsley.