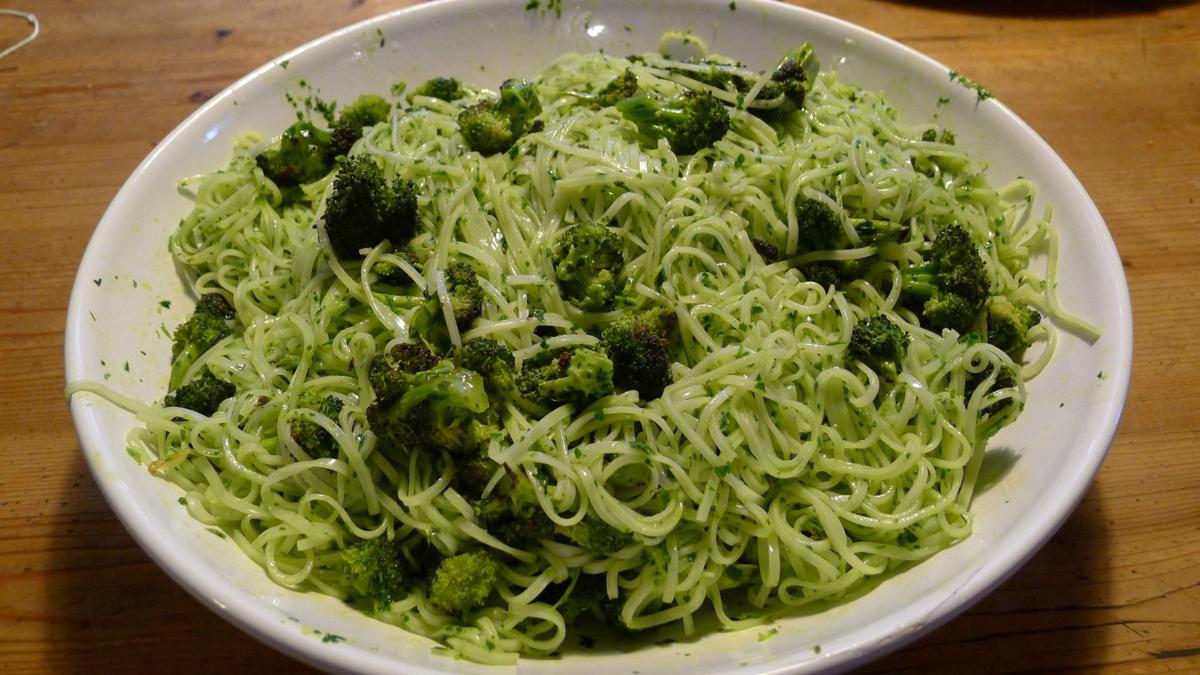 Because Chimichurri Pad Thai would be, well, inauthentic, this dish is dubbed simply Parsley Noodles. 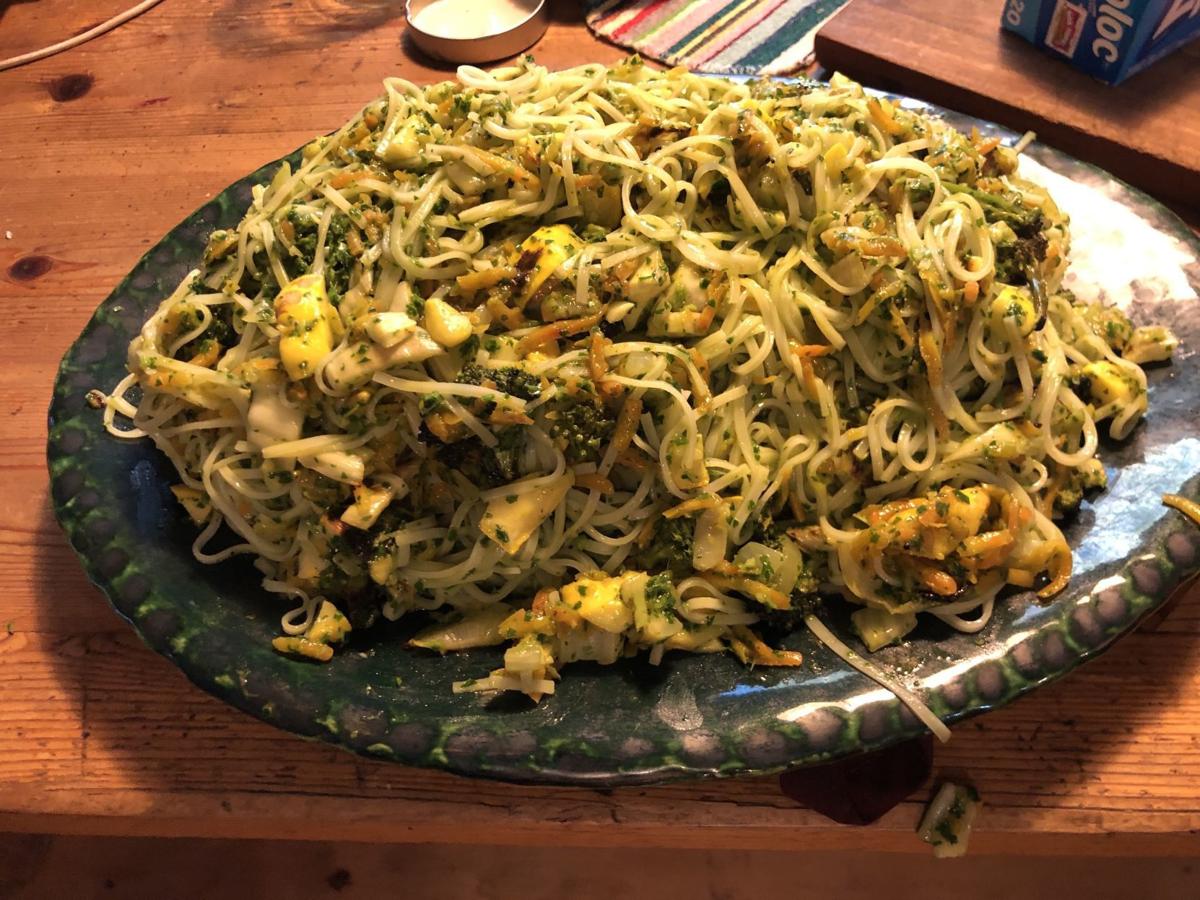 I have a farmer friend who loves all vegetables, but until recently had unresolved issues with parsley. He liked it. He respected it. He grew and sold it to customers he liked and respected. But despite cooking dinner every night for 30 years, sometimes for a literal family of interns, he never used it. Until recently, that is, when he made a confession to his crew in the middle of a lush green row of the stuff.

“I haven’t actualized parsley,” he recalls complaining. A member of his crew told him about a chimichurri taco in Los Angeles.

Parsley-based or verde sauces have long been popular in Spain and Italy, and emigrants from those nations brought the idea and seeds to Argentina, where salsa verde mingled with steak, aji chile pepper and papas fritas to become chimichurri.

The idea of what chimichurri could be, more than where it had been, found a fertile chunk of ground in my friend’s heart and kitchen. Before long it was a staple in his repertoire, another way to quickly feed a lot of people with seasonally abundant produce.

As a taco sauce, chimichurri was a natural fit; green is one of two acceptable colors for taco sauce. But my friend, who is fluent in Thai and an expert at Thai cooking, often sees food through a Southeast Asian lens.

Traditional chimichurri recipes employ red wine vinegar, but my friend uses rice vinegar in his. When I arrived one night, that mutant taco sauce had been tossed into a pile of noodles. The sight of those noodles, full of green sauce and roasted vegetables, made me hungry — and excited for the future of Chimichurri Pad Thai, a hybrid of north and south, east and west.

“Just don’t call it Pad Thai,” my friend said, with sudden concern for the literal meaning of words.

“To do Pad Thai right is really hard,” he explained, detailing the noodle-frying minutia behind authentic Pad Thai. Instead, he said, I should call his dish goy-dtee-ow Pak–Chee, which means “room temperature noodles with parsley.”

Now I was the one with the parsley problem. I can’t print a recipe called Room Temperature Noodles with Parsley, no matter how accurate and descriptive the name, and delicious the dish. Chimichurri Pad Thai, while knowingly inaccurate, conveys an image that is closer to reality. A lie that tells the truth.

Authenticity is a moving target, according to Daniel Hernandez, West Coast Style reporter for the New York Times, previously with L.A. Taco, where he covered So-Cal news, culture and food. After hearing him speak on a panel, I called Hernandez for his thoughts on the existence and pursuit of authenticity. True to form, he told a story about a taco: the Korean Taco, to be exact, invented by Roy Choi.

“I’m sure the first time he made a Korean taco people told him it wasn’t authentic,” Hernandez said. “Ten years later he has this empire of Korean tacos, and the Korean taco is authentic to L.A.”

In other words, I surmise, calling it chimichurri or Pad Thai depends on who or which traditions you are willing to throw under the bus.

“You have to kind of read the room,” Hernandez says.

When my friend made a trip to the cooler, I took a quick read of the dining room, and determined the coast was clear to try those noodles. Grabbing a fork, I quickly steered an awkwardly large bite into my mouth. There were chunks of garden vegetables tossed in there, which added texture and earthy flavors to the supple noodles, along with the green slurry of parsley.

I would agree to any terms my friend demanded, I decided, in order to have this recipe. Including what not to call it. Enough is enough. The parsley problem ends here.

The chimichurri must be made with the freshest of parsley, insists my friend. Once the sauce is made, it will improve by sitting overnight.

Preheat oven to 425. Toss the vegetables in ¼ cup of olive oil and ½ teaspoon salt. Spread them evenly over a flat pan, and roast. Give them one good stir after about 10 minutes, and roast another 10 or so until done.

Add 1/2 cup of oil to a blender or food processor, along with the garlic, vinegar, ½ teaspoon salt and water. Blend until smooth. Add the parsley, blend again. Stop well before it’s homogenized, when you can still see the leaf particles. Let it sit. If you can do this step the night before, all the better.

Heat a pot of water to boil and add the rice noodles. Turn off the heat and stir the noodles briefly to tease them all apart. After about 2 minutes, fish out a noodle and test it. It should be just on the al dente side of perfect. Keep tasting every minute or so until it’s there.

When the vegetables are done, it’s time to assemble the dish.

In a large mixing bowl, use your hands to work the final ¼ cup of oil into the noodles like applying hair conditioner. Then gently coax the chimichurri and vegetables into the noodles. Don’t overmix, overwork or overthink the noodles. Serve at room temperature.

For the candy industry, Halloween is like Christmas. The five biggest candy shopping days of the year are all in October, as All Hallows’ Eve …

An eggplant dish that is intoxicatingly delicious

"Imam Bayildi" is a Turkish baked eggplant, named and famed for its ability to knock out a grown man. Its name translates to "the imam fainted…

After the first big frost of the season, things got real at the farmers market. Buyers swarmed, knowing it was our last chance for warm-weathe…

Turkey bone soup a must after Thanksgiving

Like a Christmas sweater, this beet dish is "bright, cute, and will keep you warm all winter."

Because Chimichurri Pad Thai would be, well, inauthentic, this dish is dubbed simply Parsley Noodles.