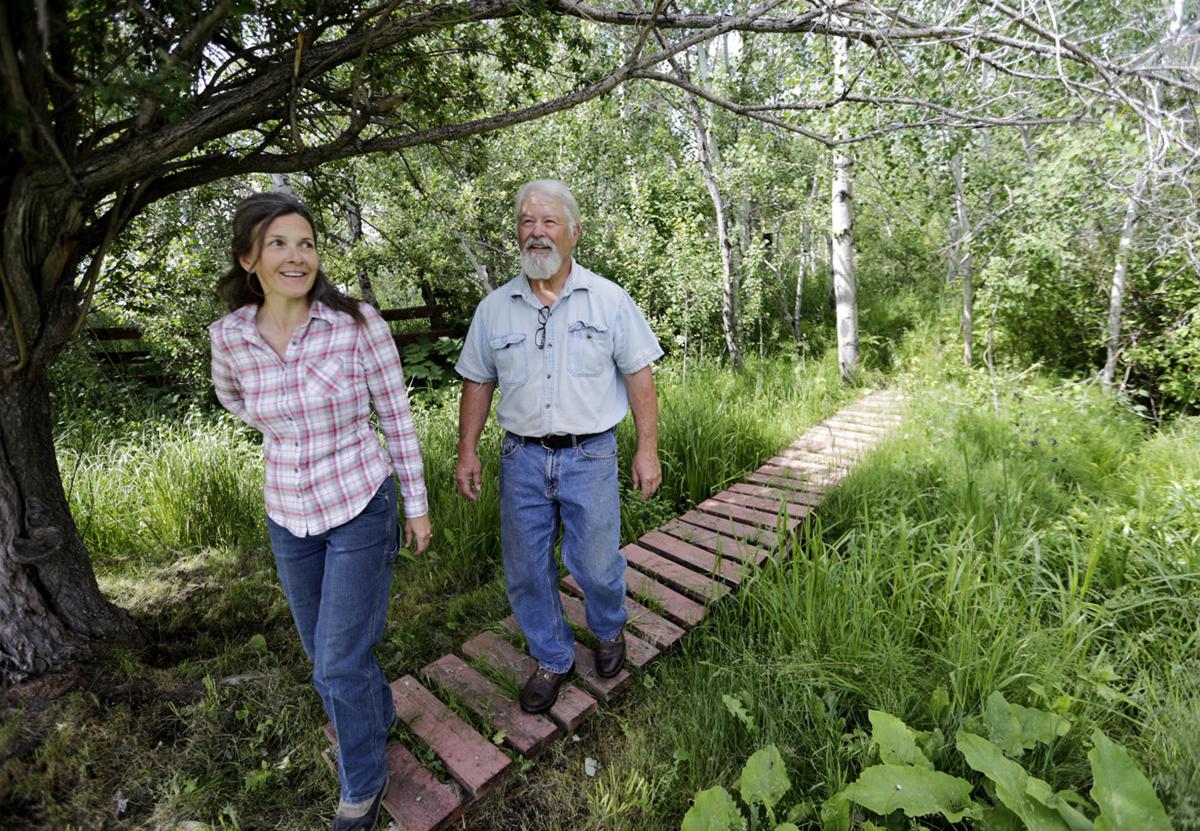 Lee and Roxanne Dunn own the White Deer Ranch near Fishtail. 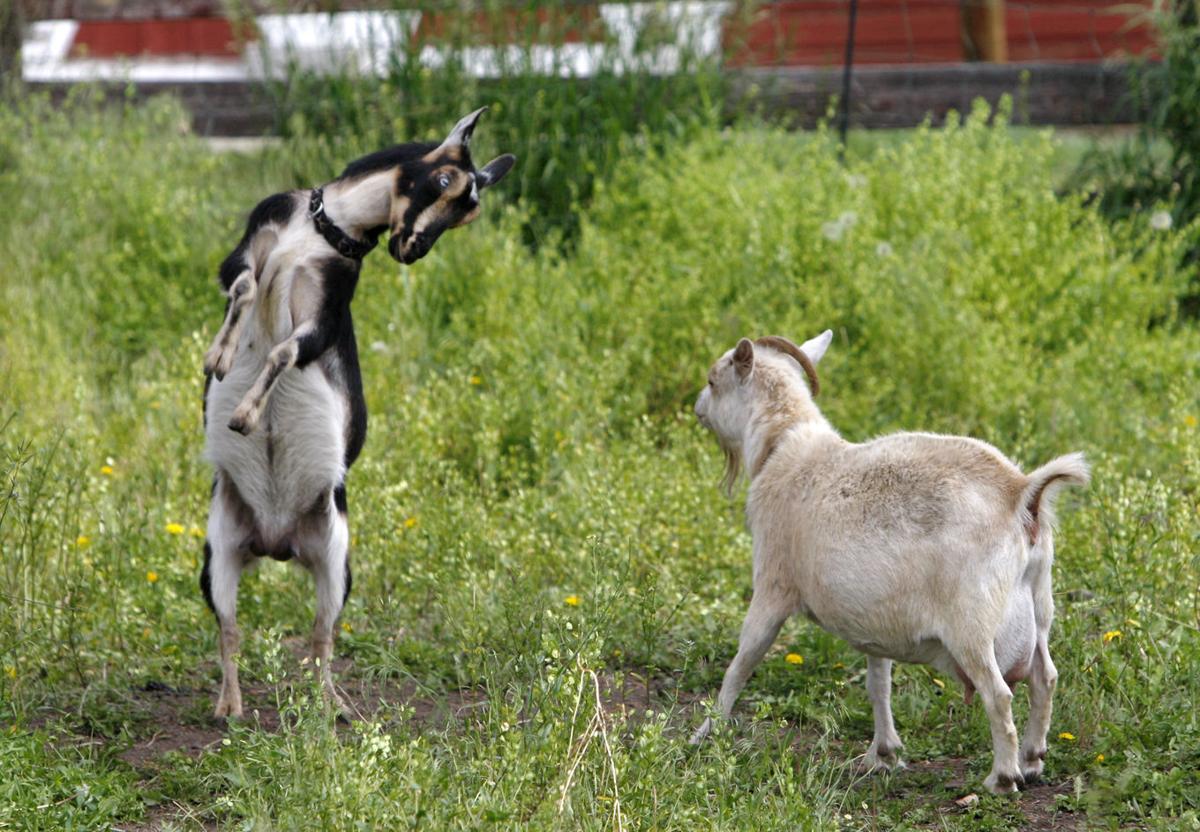 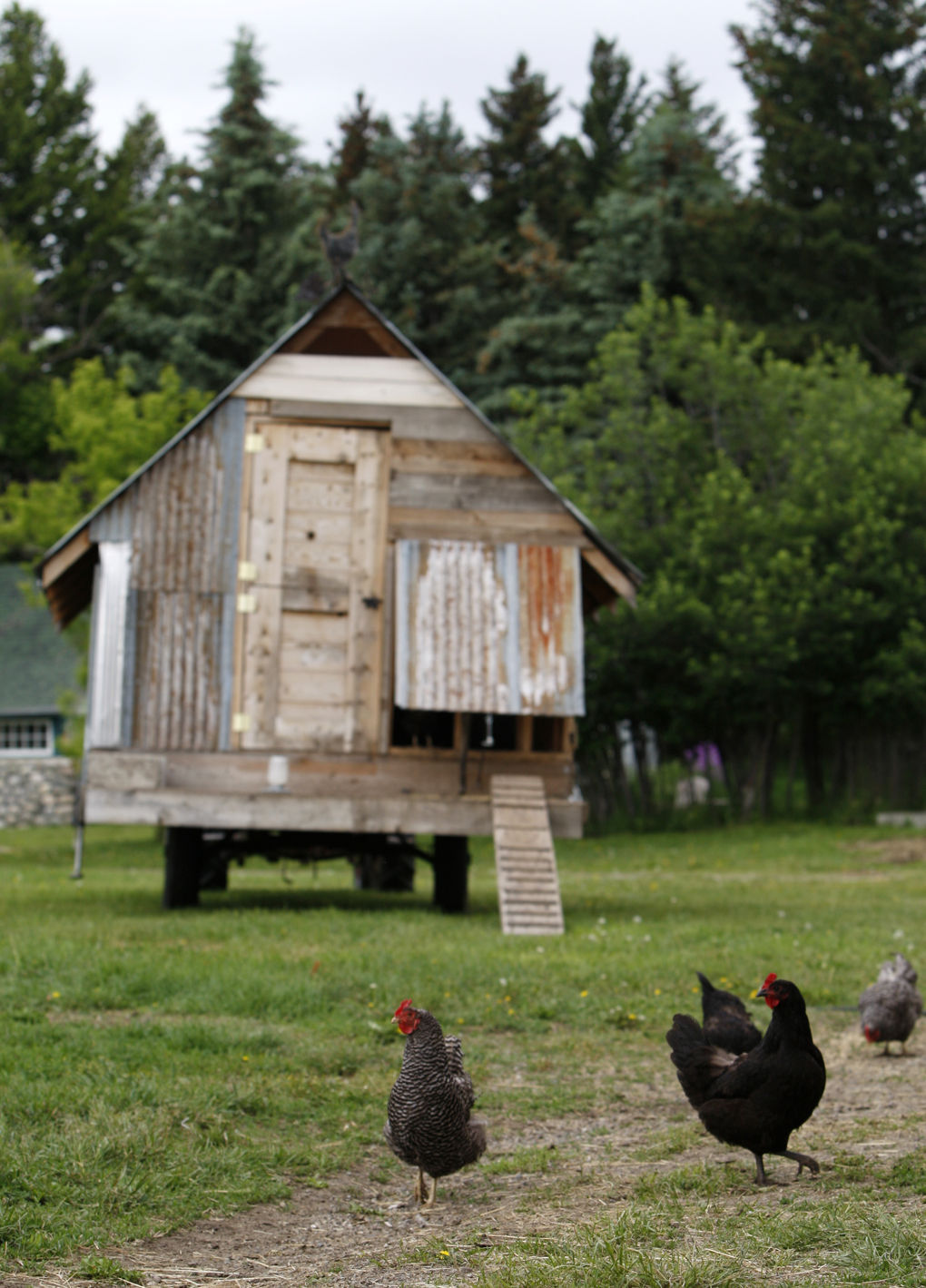 Chickens scratch near their mobile coop on the White Deer Ranch. 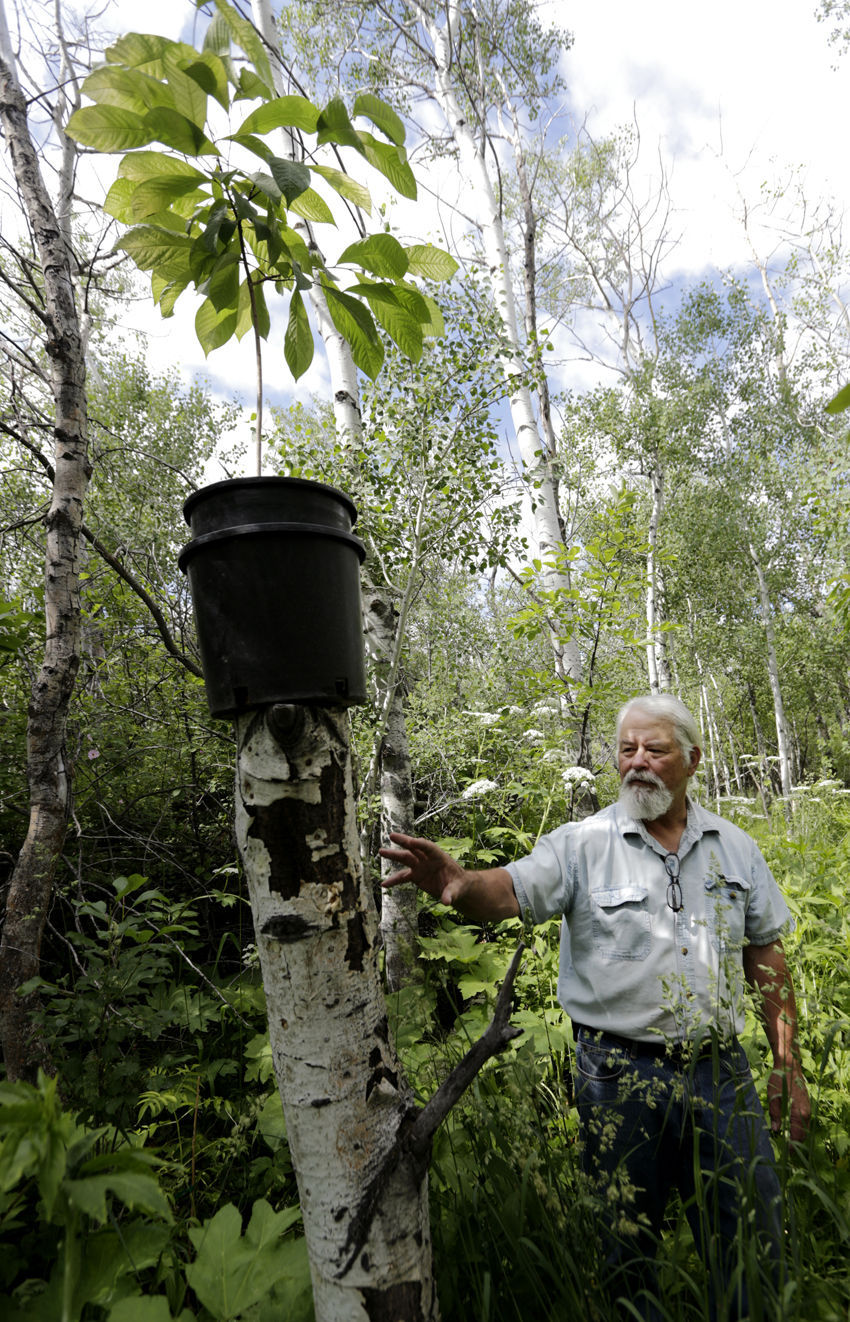 Lee Dunn talks about the wild mushrooms found on the White Deer Ranch and the paw paw plant he is trying to grow. Dunn placed the young plants on top of the aspen stumps to keep them safe from deer. 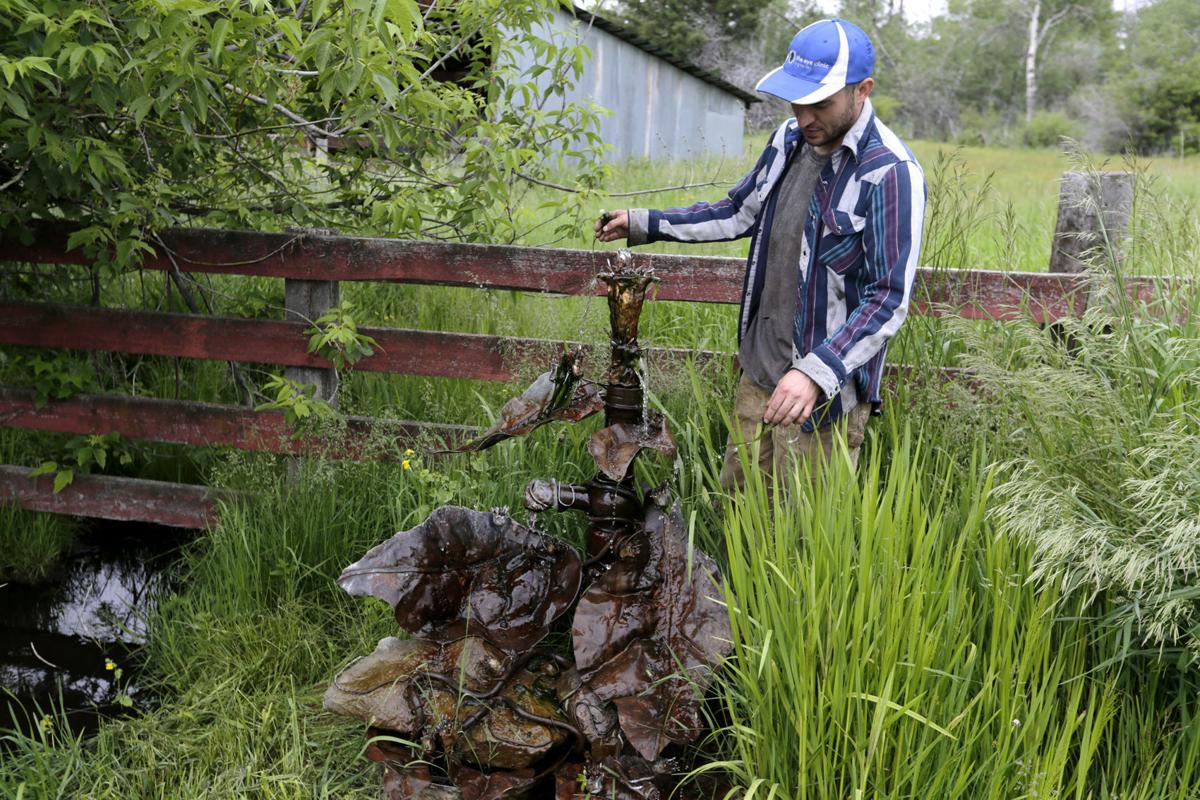 Brice LaGreca shows off the fountain he built for the artesian spring.

Tom Howard for The Montana Standard

To millions of Americans, vacation means queuing up in long lines, screaming through five minutes of terror on a roller coaster and cavorting with an oversized mouse dressed in yellow shoes.

But if your idea of relaxation means downshifting to the slower pace of rural life while learning about sustainable agriculture that's nurtured by humanely raised livestock and organic techniques, you might want to give White Deer Ranch near Fishtail a try.

White Deer Ranch, a century-old operation in the scenic Stillwater Valley, offers farm stay vacations as part of its growing menu of offerings. Visitors can rent a pair of houses on the ranch. It's part of a growing trend in tourism as city dwellers search for back-to-the-land experiences that are authentic, relaxing and educational.

Spring and summer tend to be the busiest time of year for visitors, although some customers like to go cross-country skiing in the winter.

Six years ago, Lee and Roxanne Dunn decided to pursue more sustainable operations at the historic cattle ranch, while also searching for ways to diversify their income.

To hear the Dunns explain it, the shift toward an eclectic mix of sustainable agricultural has brought many healthy changes to the land. While their efforts are far from complete, the Dunns say the techniques are bringing the environment back into balance.

They built a portable chicken coop that allows their free-range hens to scratch and forage during the day, while protecting them from predators at night.

Nigerian dwarf goats provide a steady supply of fresh cheese while grazing on greenery in the yard.

Part of the garden has been planted using hugelkultur, a raised-bed garden system in which soil is piled over old logs. Over time, the buried wood soaks up water as it decomposes. Crops grown on such mounds require little irrigation, and they thrive on nutrients released into the soil.

A Meishan sow named China -- Meishan is a Chinese breed of swine -- avoids the hot sun by lounging under shade trees. China's daughter, a Berkshire-Meishan cross, keeps her mother company in the pen.

When China gives birth to a litter, the piglets grow up in the sunshine, not in confinement. With help from a portable shelter and electric fence, the piglets are moved from pasture to pasture as they grow up.

The ranch's hay, pasture and foraged plants have been certified as organic. In the future, Lee hopes to install a small-scale hydroelectric generating plant, using water that flows from a nearby pond that's home to cutthroat trout.

A new bee house shelters hives from frigid winter winds, hungry bears and summer heat. The shelter, fashioned from a repurposed ranch shed, was copied from a European design.

By contrast, hives used by Montana's commercial beekeepers travel thousands of miles each year. After being moved to a warmer climate for winter, they spend the spring pollinating almonds and fruit crops throughout the West Coast, then return to Montana where they forage for nectar and pollen from clover and alfalfa.

The Dunns hope that their hives will continue to thrive over the winter, nourished by their own honey and stores of pollen harvested from local blossoms.

"The local pollen has medicinal properties. So it's like a medicine cabinet in the hive," Lee said.

Last winter, the Dunns launched another line of business.

Translucent skylights installed on the roof of a renovated shed let in enough sunlight so that microgreens can sprout in trays of growing medium packed with densely sown seeds. The nutrition-dense greens, just a few inches tall when harvested, are packaged and delivered to grocery stores and restaurants throughout the area.

"We learned about this through our local food group friends," Roxanne said. "Somebody was selling their microgreen equipment. We had thought about it before, and we thought we would give it a try."

They started knocking on doors at restaurants, and area chefs jumped at the chance of offering locally sourced greens instead of produce trucked in from California.

"The chefs like the varieties and the color. They want to put some pizzazz on their plates," she said. "They're really nutritious, and that's why the health food stores want them as well."

Roxanne's son, Brice LaGreca, not only works on the ranch, he fabricates metal sculptures that add a whimsical touch to the property. A metal bee about the size of a German shepherd waves in the wind near the bee house. Water gushing from an artesian well flows through a pipe that's decorated with leaf-shaped steel decorations. He also fabricates sculptures of herons, ravens and sandhill cranes, and sells his work through a website, www.mt-forge.com.

The Dunns have invested countless hours of research into improving their practices and diversifying the ranch operation. "I learned how to milk a goat by watching a YouTube video," Roxanne said.

They're also working to nurture plants that thrive in the ranch's various microclimates. Watercress sprouts in a small stream that trickles through an aspen grove. Foraging trips yield baskets full of oyster mushrooms.

While nobody has figured out a way to ranch without investing in hard work, the Dunns believe they have the right formula to prosper for years to come.

A winter salad surprise: Try dressing it with red wine

Assembling many complementary, yet contrasting, textures and flavors into your salad is key to creating the perfect complex and satisfying dish.

This creamy wine-absorbed rice with prosciutto​ is the perfect hot dish to warm you on cold winter's night.

Shelter under the Big Sky at the Shade Tree Cafe

The Shade Tree Cafe in Denton provides delicious food and shades of time.

Grab a malty stout and follow this recipe for perfectly gooey, chocolate chunk and stout brownies.

Sustainable sophistication: How to make your holiday season more eco-friendly

Simple ways to turn a typically high-waste season more sustainable, while still being chic and sophisticated.

Top-rated unplugged gift ideas that will keep kids’ minds active and their creativity sparked without the use of screens.

The chicken thigh recipe here is festive enough for a party of just a few people or even for one or two with delicious leftovers.

Watch Now: How to host a virtual holiday party, and more videos about COVID-19 safety

Watch how to host a virtual holiday party this year. Plus, see how a new app allows kids to meet Santa virtually and check out more videos about staying safe this holiday season.

These wine-braised, bone-in beef short ribs are sure to make your mouth water

Cooking these bone-in beef short ribs slowly is key to breaking down the fatty, connective tissue to achieve tender meat.

This talented Dalmatian can sing and play the piano

Lee and Roxanne Dunn own the White Deer Ranch near Fishtail.

Chickens scratch near their mobile coop on the White Deer Ranch.

Lee Dunn talks about the wild mushrooms found on the White Deer Ranch and the paw paw plant he is trying to grow. Dunn placed the young plants on top of the aspen stumps to keep them safe from deer.

Brice LaGreca shows off the fountain he built for the artesian spring.