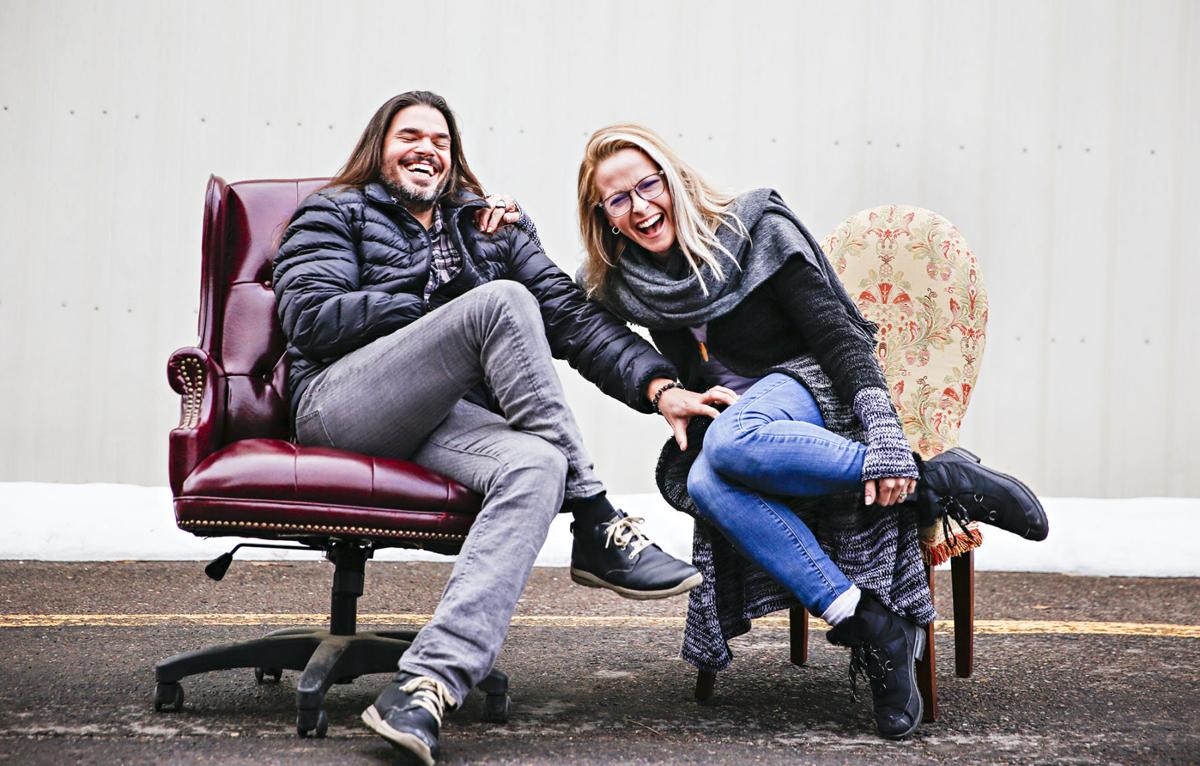 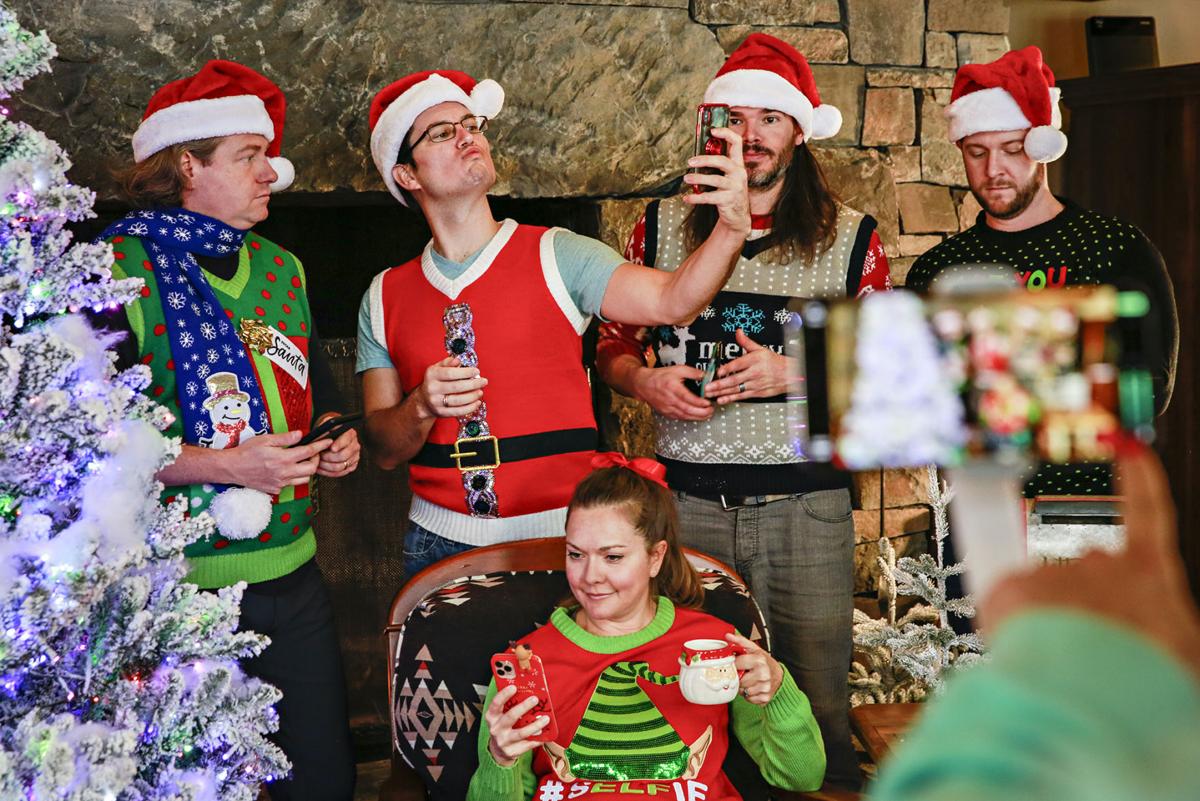 Actors Luke Walrath, Billy Thompson, Dustin Brayley, Eric Krop and Rebecca Spear from the Alpine Theatre Project perform for a scene for a Yuletide music video in Whitefish on Dec. 12.

KALISPELL — Back in March, actor and singer Dustin Brayley was on stage performing the first of four concerts in Florida with the Trans-Siberian Orchestra, a touring rock band, when officials suddenly canceled the remainder of their shows due to the novel coronavirus that was spreading around the world.

As nationwide lockdowns began, Brayley immediately booked a flight home to Los Angeles, fearing he might get stuck in Florida.

After 17 chaotic hours in mask-less airports among panic-stricken travelers, Brayley was back home in L.A. with his wife, actress and Broadway veteran Meredith Patterson, and their 5- and 8-year-old sons. With nearly all of their jobs canceled for the foreseeable future as the pandemic raged on, they hunkered down in California.

But not everything was canceled. In July, Brayley, Patterson and their kids road-tripped to Whitefish to help coach Alpine Theatre Project's (ATP) Broadway Summer Training Camp, which they've done for the last few years. During the trip, their two sons cried and begged their parents to move the family to Whitefish.

In four weeks, they were completely moved out of their home in L.A.

"We said, 'Screw it,'" Brayley told the Flathead Beacon. "There's nothing keeping us here; all of our jobs are gone. We could either have the mentality of 'let's just ride this out' or 'let's just make this our home base.'"

Brayley and Patterson are not the only talented transplants who have moved to the Flathead since the pandemic began. In the last few months, ATP co-founder Luke Walrath says a handful of professional artists and former Broadway actors he's worked with have permanently relocated to the area.

Since Walrath and his wife, Betsi Morrison, founded ATP in 2004, they have consistently hired professional Broadway stars for the theater's shows and to coach the kids' camps in the summer, creating connections and introducing East and West Coast talent to Montana. With no work in the entertainment hubs of L.A. and New York City, those artists are now questioning why they live there.

Walrath has seen a gradual migration of artists to the Flathead since he moved to the area in 2002, and that trend skyrocketed this fall after the pandemic continued to leave performers out of work. But he didn't foresee the high volume of professionals leaving cities to anchor roots in Northwest Montana.

"I think at a certain point the valley started creating its own gravity," Walrath said. "Nick Spear moved here in 2007, then Mike Eldred, and Erica von Kleist in 2012. Then all of a sudden it started picking up."

As more artists have gravitated to the area in recent years, the valley has increasingly become an entertainment hub, with more artists realizing they can maintain their professional careers while calling Montana home base.

After working in Whitefish with ATP the past few summers, Patterson and Brayley knew there was a community of artists here and kept the area on their radar. With most of the entertainment industry on hold until the pandemic sees significant progress, they're grateful they have work in Montana.

In the last nine months, ATP has done everything from the virtual musical "Young Frankenstein" to outdoor performances this summer and fall with "Aladdin Jr." and "Operalesque" to the upcoming "Yuletide Affair." These types of musical adaptations haven't been possible for theater productions in other states, making Montana a more attractive place for professionals seeking work and creative outlets.

"We have creativity here that we're able to do," Patterson said. "Being able to do outdoor theater with everyone in masks and social distancing, Montana is unique."

Vocalist and former Broadway actor Eric Krop had a similar mindset when he decided to move to Whitefish permanently a few months ago. After working for ATP this summer and helping with "Aladdin Jr.," Krop and his husband pulled the trigger and moved shortly afterward.

Krop has lived in big cities like New York City and L.A. for most of his career, working on the Broadway musical "Godspell" in 2011 and later transitioning to focus on songwriting and singing. After living in L.A., he describes it as a place people go to "be seen."

"It's not my vibe," Krop said. "Here, it's all about what can I offer to my community. The mentality of this area is people are super nice, honest and just want to do their thing."

Krop says when they arrived during the busy tourist season this July, Montana almost felt normal after coming from a strict lockdown in L.A.

In the spring, Krop had watched the next year of jobs and commission work disappear when COVID canceled almost everything. When his husband started working remotely, they no longer had a reason to be in the big city.

"I asked myself, 'What am I doing here?'" Krop said. "I can go work on music in Montana and be happy."

Krop has kept busy since he started working again in July for ATP after a slow spring on the West Coast. He's also been teaching voice lessons and a remote course for a college in L.A.

"I cannot believe I have work and money in the bank," Krop said. "It's insane. I'm incredibly lucky and grateful and ATP has saved my life."

Now, he's a cast member and audio-engineer for ATP's annual "Yuletide Affair." Artists are working together to make the musical happen during the pandemic with small groups and remote production, as actors and musicians film scenes on location in places like the banks of the North Fork Flathead River and Whitefish City Beach, while Krop engineers the sound from Whitefish.

With a diverse range of skill sets, from voice to dance to music, several artists are also working together on personal projects in Whitefish. With a few different albums and musicals in the works, as well as future performance plans, the valley will one day have a front-row seat to these top-tier shows.

"Once we return to some normalcy, it will really thrive," Brayley said. "When we can start putting in the body of work that will be able to happen with people who are now local, we'll be turning out so many great performances and work with things that stretch from the main stage to concert work and filming. All these people bring this different element to it."

Not only will the valley see more high-quality professional shows, kids now have a small army of experienced, professional artists to learn from.

"Here's the thing that's changing with our business," Patterson said. "It's not just a big city that you have to be in anymore. People are learning to do stuff virtually, and I really think it's going to make the smaller towns thrive. The kids here are now being coached by Broadway veterans."

From voice lessons to music theory to help with college applications, Walrath says everyone is teaching classes and educating the Flathead Valley's youth.

"We've learned how to do a lot of these things COVID-safe," Walrath said. "They're able to coach the kids and, to me, that's one of the most exciting things. We have all this experienced talent and they immediately wanted to start teaching."

Former "Rent" Broadway actress Tracy McDowell moved from Brooklyn to Whitefish with her husband and son this fall. In addition to working for ATP, she's also teaching private voice coaching via Zoom and in-person with masks, and she's also coaching students who are applying to college.

After living in New York City for 20 years, McDowell likes the slower pace of Montana, especially with a toddler and another baby on the way. She still plans on traveling to the East Coast to work periodically once the pandemic subsides, but she's also planning on picking up gigs here, too.

"It's really tiring and you really have to make a lot of money to live there," she said. "I was in a really famous wedding band and that's all gone, but there's wedding bands here that I'm going to do. Just having a home base and having more space to create without the hustle of having to make thousands and thousands of dollars a month."

Being in Montana full-time, McDowell and other new residents can provide students with direct connections to the Broadway and entertainment industries, creating opportunities that might not otherwise be possible. Patterson, too, is busy coaching acting, tap dancing and industry networking to kids in the area. She says there's now more opportunity in the Flathead Valley than even where she grew up in the Bay Area.

"There's artists all over the country that are good enough to star on Broadway," Patterson said. "They just haven't geographically gone there to battle the city and battle auditions, and that's what I think is exciting. Towns like this will get Broadway-caliber people on these stages and get exposed to that kind of theater."

Now that there are so many professional artists in the Flathead, ATP plans to launch a year-round curriculum of musical theater, acting, dance, studio and more for students, which will eventually become a full-time after-school program at the ATP Garage, their studio in Whitefish.

"We're trying to build this program and make it a place where young talent can come and have a place to be creative," McDowell said.

While everyone waits for live shows to restart nationwide, some of the Flathead's newest residents are thankful for ATP and their ability to continue working and creating art throughout the pandemic.

At ATP's production of "Dare to Dream: The Road to Broadway" this summer, McDowell says the collaboration triggered some emotional moments among their tight-knit group.

"I miss teaching, I miss singing out loud with a mask off and I miss performing really, really bad," McDowell said. "This summer when we all did the show, we took our masks off and started crying."

ATP has already proven that it can produce high-quality performances even in a pandemic. Working on the "Aladdin Jr." production in a snowstorm this fall, McDowell teared up after realizing live theater was still possible even with the coronavirus.

"Theater is not dead," McDowell said.

For more information about ATP or to buy tickets to "Yuletide Affair," visit atpwhitefish.org.

44 notable, famous and infamous people who have called Montana home

Montana is an attractive state for people looking to find peace and quiet and a plethora of outdoor activities. It's also been home to a numbe…

Charley Pride, who played baseball for the Missoula Timberjacks and the East Helena Smelterites in the 1960s before becoming the first Black member of the Country Music Hall of Fame, has died at age 86.

Actors Luke Walrath, Billy Thompson, Dustin Brayley, Eric Krop and Rebecca Spear from the Alpine Theatre Project perform for a scene for a Yuletide music video in Whitefish on Dec. 12.