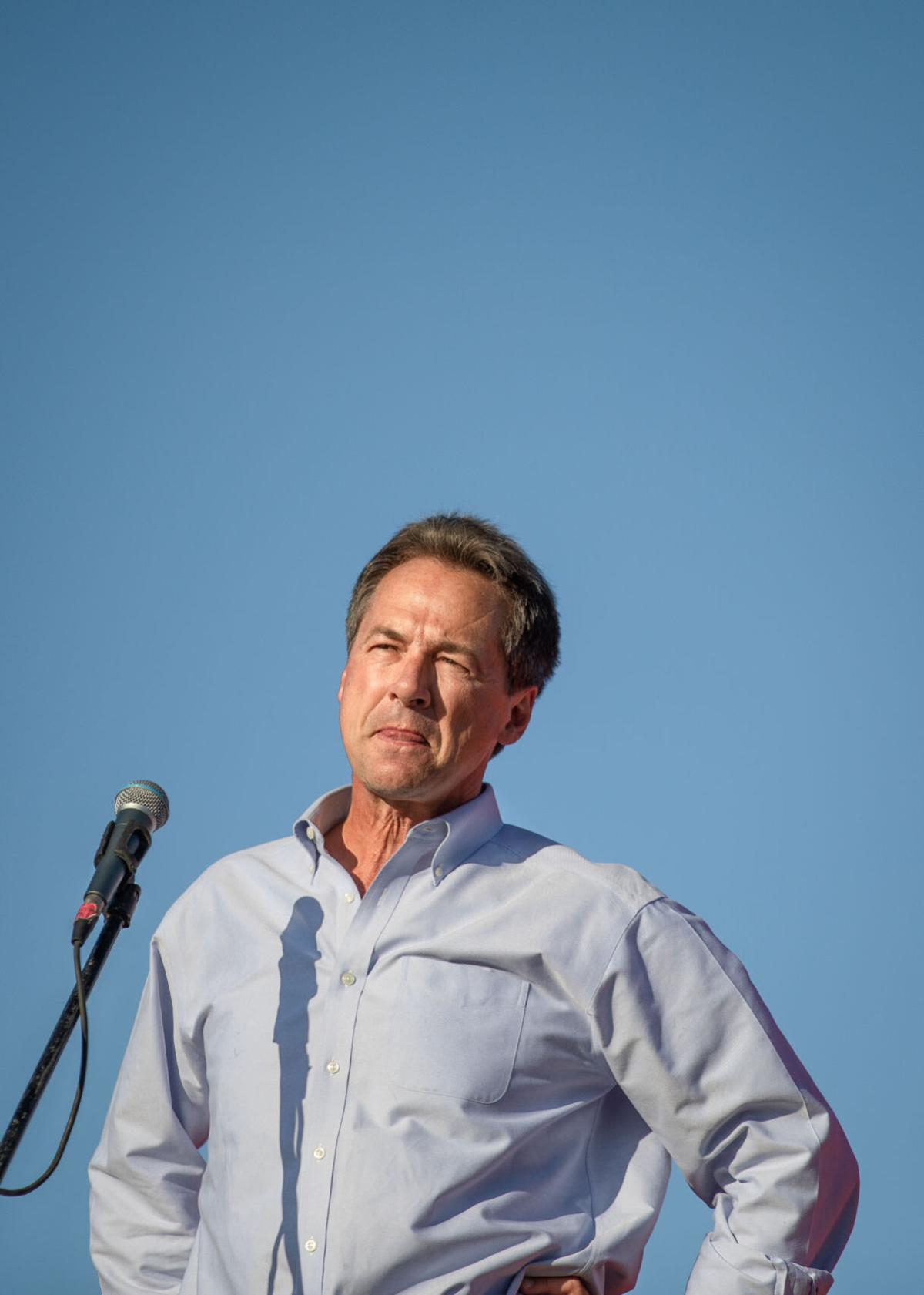 Montana governor and candidate for U.S. Senate Steve Bullock speaks over the radio to a gathered socially-distant audience in cars during the 'Drive-In Feed' hosted by Montana Democrats at the Little Shell Cultural Center near Great Falls, Montana on Sept. 4, 2020. 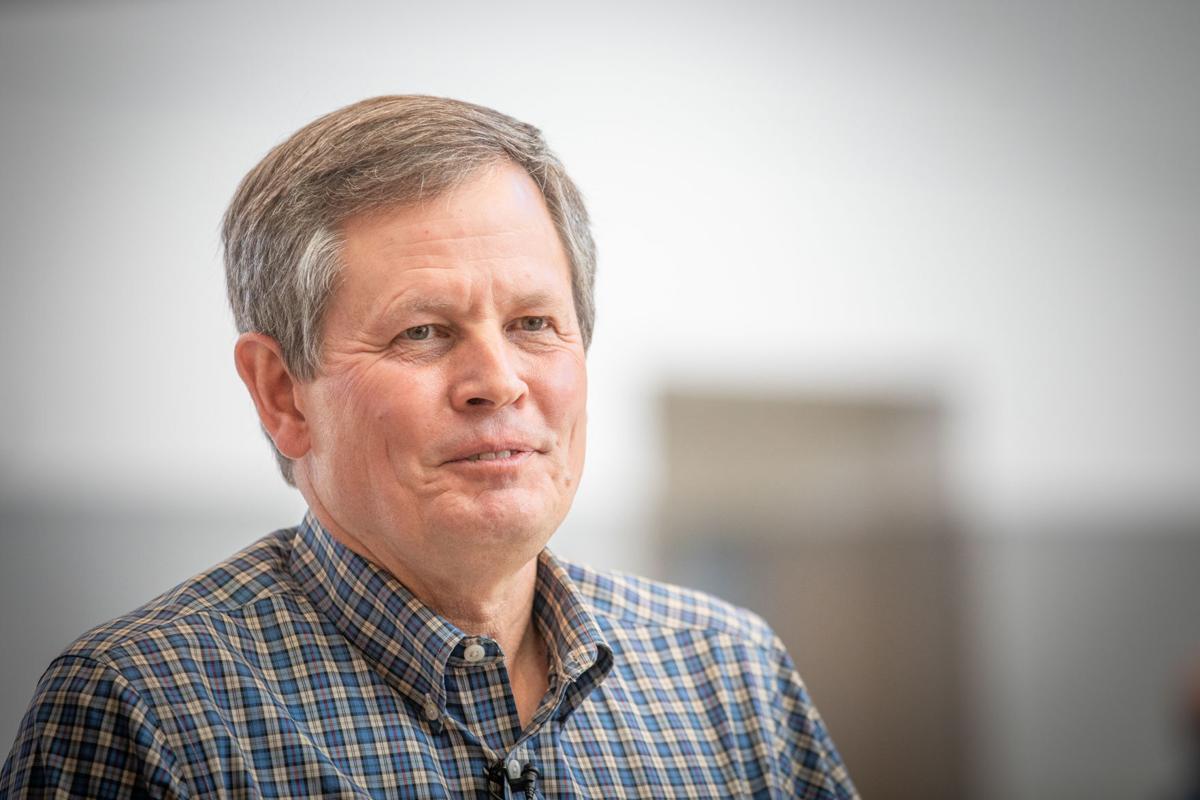 Montana republican senator and incumbent candidate Steve Daines during a campaign event at Hellgate Middle School in Missoula on Sept. 4, 2020.

Let’s get something straight from the start: Steve Daines wears cowboy boots, too.

When Gov. Steve Bullock, the Democrat seeking to topple Republican Daines from his U.S. Senate seat, made a brief run for president, the national media made much of his boots, usually in the first few paragraphs of a story. Even now that he’s running for Senate, Bullock’s boots still get the occasional nod. Daines’, not so much.

Their footgear is not the rivals’ only similarity.

Both talk a lot about China — Daines duns the superpower for letting the coronavirus escape to the rest of the world, and touts his work in ending a 14-year Chinese embargo on U.S. beef; Bullock accuses Daines — who worked there for Procter & Gamble in the 1990s — for enabling the loss of U.S. jobs to China.

Both don the mantle of public lands champion. Daines takes credit for persuading President Donald Trump to sign the Great American Outdoors Act that fully funds the Land and Water Conservation Fund; while a winsome Bullock ad features his three teenage children echoing his hiking mantra: “And you know what’s great? Every one of us owns these public lands.”

Both lay claim to coronavirus response bona fides, with Bullock guiding the state through an early shutdown and phased lifting of restrictions, and Daines part of the overwhelming Senate majority that approved the Coronavirus Aid, Relief and Economic Security (CARES) Act that sent $1.24 billion to Montana.

Both trot out the mandatory Montana bragging right as homegrown, although Daines’ fifth-generation claim skates over his California birth.

And they inevitably employ creaky campaign tropes about “hardworking Montanans” and “the Montana way of life,” buffed by both to a genial gloss.

It’s possible those surface similarities, layered atop Daines’ advantage as an incumbent, and Bullock’s as a two-term governor, account for the consistent statistical ties that polls indicate in the Senate race.

But below that surface their differences are as stark as those between Bullock’s boots — a gift from members of the National Governors Association, which he chaired in 2018 — and Daines', which come from Carter’s cobbler in Bozeman, differences that yawned wider and deeper still following the recent one-two punch of a Supreme Court vacancy and President Trump’s musings about a transition — or not — of power.

"It certainly has changed the conversation about things going on in the Senate race," said political analyst Lee Banville, University of Montana journalism professor and author of "Covering American Politics in the 21st Century: An Encyclopedia of News Media Titans, Trends and Controversies."

" … Much like 2020 has been, it kind of makes the word 'unprecedented' seem not quite adequate," Banville said.

The day after Justice Ruth Bader Ginsburg’s death, Daines issued a statement saying the Senate should move forward with a confirmation, and has followed with near-daily statements to that effect since, recently telling Fox Radio’s Brian Kilmeade — referencing the Supreme Court‘s role in determining the Bush V. Gore outcome in 2000 — “We need to get this done before the election.”

Bullock pounced with a reminder that Daines opposed President Obama’s court pick shortly before the 2016 election. “I don’t think it’s right to bring a nominee forward in an election year,” Daines said then, adding he'd feel the same way if a Republican president were in power.

In the Kilmeade interview, Daines ascribed lofty importance to Montana’s Senate race. “If I lose this seat here in Montana, we lose the majority" — responsible for confirming Supreme Court justices.

Such a loss, according to polls, is a distinct possibility. The nonpartisan Cook Political Report moved the race from Solid Republican to Leans Republican in March, after Bullock’s last-possible-minute entry, and classified it in June as a toss-up, where it’s stayed ever since. Daines is viewed as one of the most vulnerable Republicans in the Senate, along with Susan Collins in Maine and Cory Gardner in Colorado.

The scent of political blood has attracted outsize spending on behalf of both candidates, breaking fundraising records by July, according to the Center for Responsive Politics, with Bullock’s $7.7 million more than double the previous quarterly record.

The candidates’ backgrounds seem tailor-made for their respective political parties. Bullock, the career public servant — first as Montana’s attorney general and twice as governor — grew up in modest circumstances in Helena and likes to point out that the governor’s mansion is only four blocks from his boyhood home.

Daines, who recites the GOP mantra of cutting taxes and regulation, spent most of his career in the private sector, with Procter & Gamble and later with RightNow Technologies, which was then owned by Greg Gianforte, the Republican who now represents Montana in Congress. After an unsuccessful run for lieutenant governor on a GOP ticket with gubernatorial candidate Roy Brown in 2008, Daines was elected to Congress in 2012, and then to the U.S. Senate in 2014, where he now seeks a second term.

Both candidates now have records of accomplishments they can point to, as well as actions their opponents can hold against them, and both gamely hammer away at those points — China! Public lands! Energy! — through a campaign overshadowed by the effects of the pandemic. After initial low numbers of COVID-19 cases, Montana now ranks 10th in the country for the highest number of  cases per capita (1,135 per 100,000 people), according to a recent New York Times analysis.

Part of Daines’ messaging on China is that the country must be held accountable for the virus, although he doesn’t say how. Bullock’s last-possible-minute entry into the race came just as the seriousness of the COVID-19 threat was becoming clear.

The governor issued a stay-at-home directive and closed schools on March 15, just days after he filed to run for Senate, and five days later shut down businesses where people congregate such as bars, gyms and theaters. For weeks, the governor was front and center, leading the state through the pandemic, extending school and business closures, then guiding a phased reopening.

Since voting for the CARES Act that sent $1.25 billion to Montana, Daines has criticized Bullock for not disbursing all of those funds. Bullock argues that the state has committed roughy $1 billion and that it needs to hold some back for future relief, especially as Congress has yet to pass a second relief package — something Daines acknowledges will not happen before the election.

The length of the pandemic has eroded some of the initial support for Bullock’s handling of it, with Daines joining those who criticize the restrictions as wreaking excessive harm on the state’s economy, already slammed by the effects of the pandemic. Bullock countered with state Labor and Industry Department statistics showing Montana with the sixth-fastest employment recovering in the country, and an August unemployment rate of 5.6%, lower than the 8.4% national average.

The coming Supreme Court nomination process added another national issue to Montana's statewide race, with Daines blithely disregarding his statements of four years ago and instead proclaiming that the fate of the Second Amendment hangs on the confirmation of nominee federal Appeals Court Judge Amy Coney Barrett.

It’s a way for him to point out Bullock’s lean to the left on the issue; the governor favors universal background checks and a ban on assault weapons. Daines frequently cites his A-plus rating — and Bullock’s F — from the National Rifle Association.

Just as Daines focuses on the importance of the Supreme Court to any cases that might involve the Second Amendment, Bullock highlights a far more immediate concern to Democrats: The fact that, just a week after the Nov. 3 election, the high court is scheduled to hear a case involving efforts to declare the Affordable Care Act unconstitutional. A court ruling to uphold that would undo Montana's Medicaid expansion that provided health coverage to 90,000 Montanans.

Daines, who has voted repeatedly to repeal the ACA, or Obamacare, said in his second debate with Bullock that it was "highly unlikely" the court would overturn the ACA, but that if it did, he favored continuing protections for people with pre-existing conditions, though didn't say how.

There’s also the role the court could play if the results of the election are unclear or contested, with Trump’s tap-dancing around a commitment to a peaceful transition of power raising alarm among Democrats.

“There are deep political divides in our country, but we must all be united in defending the legitimacy of this election and committed to the peaceful transition of power. Protecting our democracy is not a Democratic or Republican issue — it's an American one, and we need to be able to count on all of our elected leaders, including Senator Daines, to stand up against any attempts to undermine it,” Bullock said.

A Daines spokesperson provided a statement to media: “There’s always been an orderly and peaceful transition, and that will remain the same.”

As to whether that issue resonates with Montana voters, Banville said, "I think we're very far from Washington, D.C., and in many ways a lot of people see Washington as not affecting our lives a ton these days."

Daines is a full-throated Trump supporter; a photo of himself with the president at a Trump rally in Bozeman dominates his campaign web page. He tries to paint Bullock as equally supportive of Democratic leaders in Congress, peppering comments about his rival with references to Speaker of the House Nancy Pelosi and Senate Minority Leader Chuck Schumer and the “liberal mob” that he says Bullock would join were he to prevail.

Bullock, for his part, emphasizes his bipartisan accomplishments, such as Medicaid expansion, during two terms with a Republican Legislature.

The swirling national conversations in the final weeks of the election can be an unwelcome distraction from the issues both Daines and Bullock are trying to highlight.

"I don't think Steve Bullock wants this to turn into a debate about should the Senate be Democrat or Republican. He's running on 'I'm better at representing Montana in Washington,'" Banville said. "It's making it harder for Steve Bullock to make this about public lands, or for Steve Daines to make it about economic opportunities after the pandemic."

VOTER'S GUIDE 2020: Candidate's views on the issues in local, area and statewide races

Montana governor and candidate for U.S. Senate Steve Bullock speaks over the radio to a gathered socially-distant audience in cars during the 'Drive-In Feed' hosted by Montana Democrats at the Little Shell Cultural Center near Great Falls, Montana on Sept. 4, 2020.

Montana republican senator and incumbent candidate Steve Daines during a campaign event at Hellgate Middle School in Missoula on Sept. 4, 2020.