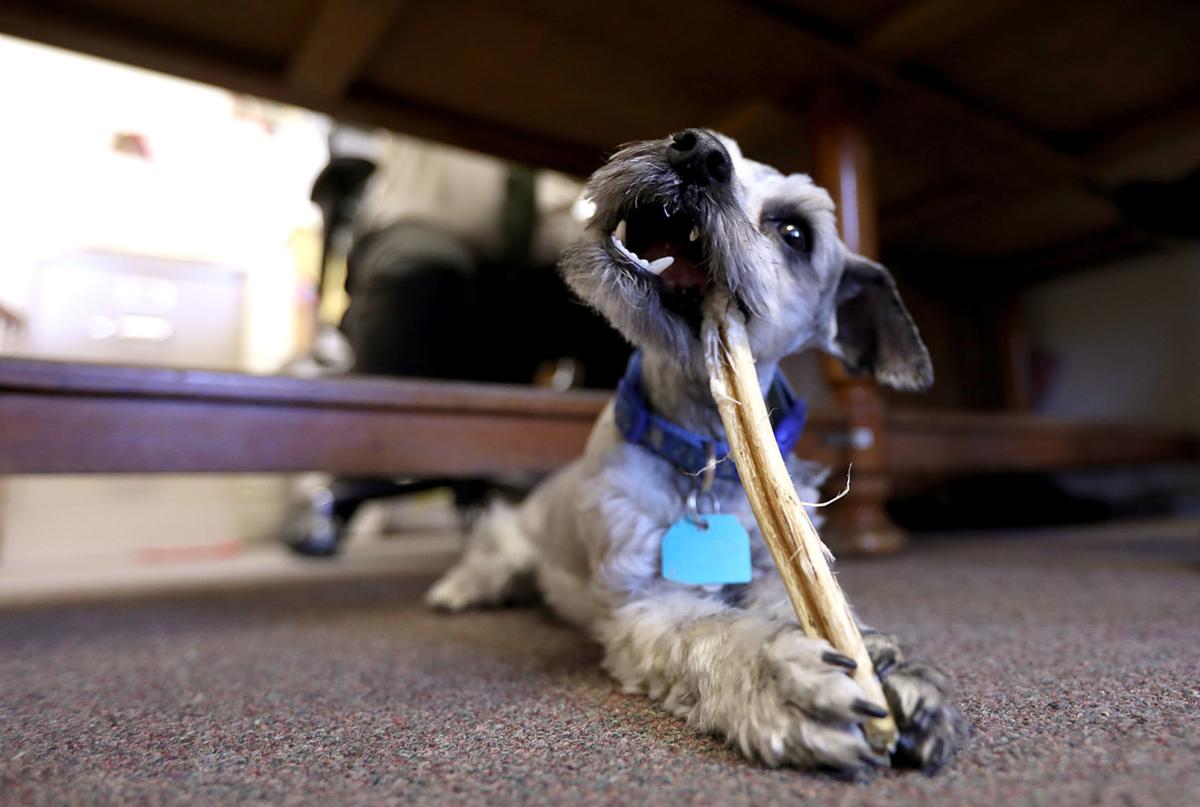 Anaconda-Deer Lodge county attorney Ben Krakowka says that Charlie, with his  big eyes and old-man eyebrows, understands that his job as a comfort dog is to be adorable and to set crime victims or witnesses at ease so they can recall events in more detail. 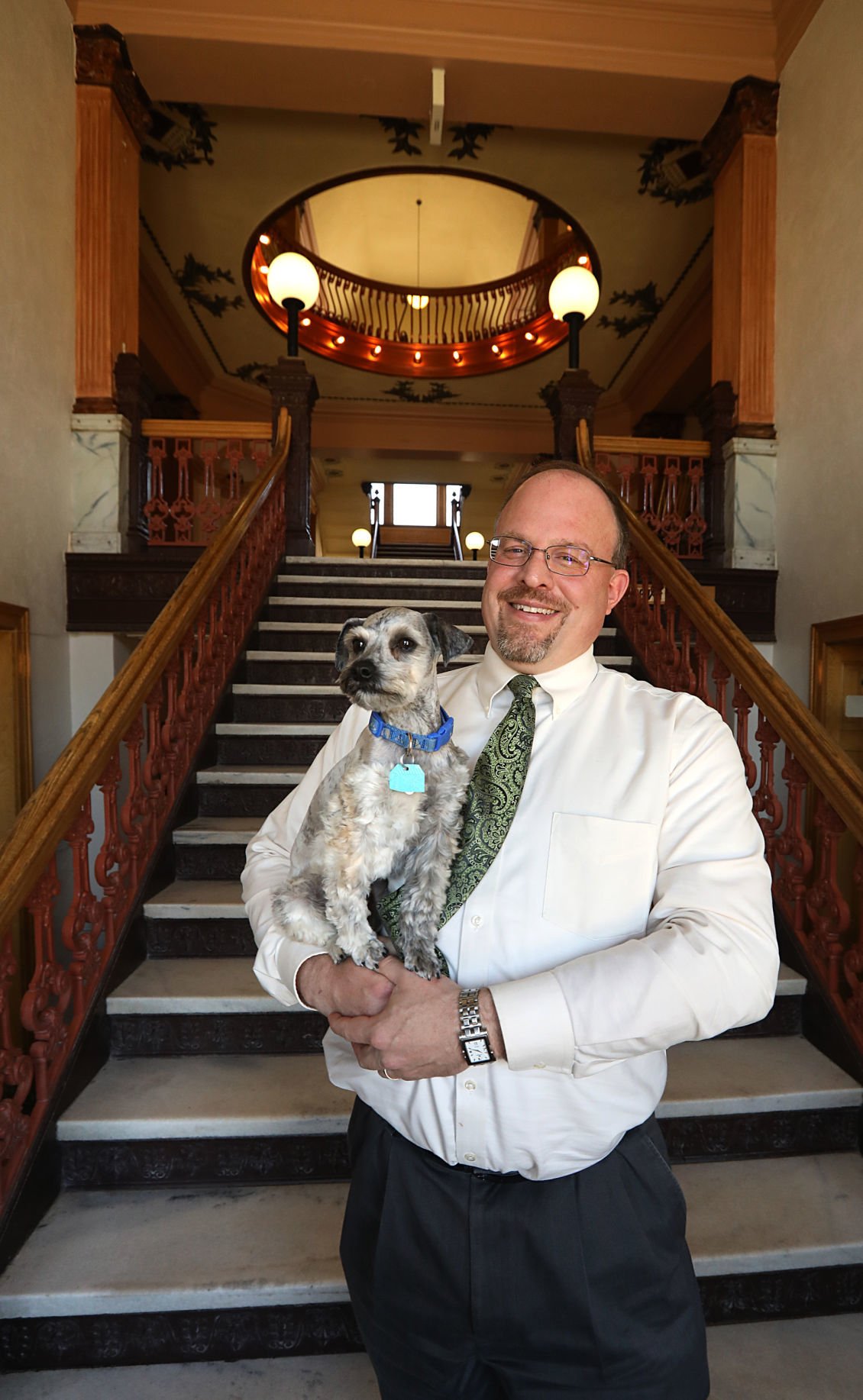 Ben Krakowka, the Anaconda-Deer Lodge county attorney, stands with his dog Charlie in the Anaconda County Courthouse. The 8-pound dog works with Krakowka to provide a calm presence for those who have to testify in court.

Tommi Howell was fretful about calling the police when she saw a man tearing through the toxic, off-limits “red sands” in Anaconda in a pickup one night, knocking some of the smelting waste onto a popular walking trail.

“I have really bad anxiety — horrible anxiety — and I had a little girl with me,” Howell recalls.

She didn’t “want to be a jerk” and was afraid of what the driver might do, but she made the call anyway.

She thought that was that, but the man challenged a DUI charge from that night, taking it all the way to trial two years later. Ben Krakowka, the Anaconda-Deer Lodge county attorney prosecuting the case, needed Howell to testify in court this past April.

“I was really freaked out,” Howell said. “I didn’t want to do it. Being in front of everyone and getting someone in trouble? I’m thinking, ‘Is he going to recognize me?’ By the time I actually got there, I was terrified.

“I mean terrified. I told Ben how anxious I was. I said my anxiety was really, really bad. He said, ‘That’s why I have this little guy.’”

That little guy is Charlie, an 8-pound “schnarkie” — a schnauzer and Yorkshire terrier mix — who goes to work with Krakowka every day to the Anaconda-Deer Lodge Courthouse.

They’re pals, no doubt, but Charlie has extra duties at work, comforting and calming crime victims and witnesses when needed so they recall more of what happened and can say it later in court if necessary.

With a simple suggestion and a chew stick from Krakowka, Charlie will hop into anyone’s lap and settle in quickly and softly. You can pet him, play with him, grab his ears, grab his tail — whatever. He’s cool and calm.

He spends part of his day in a little sectioned-off corner of Krakowka’s office with his blanket and dog dishes and favorite chew stick. But he’s ready to work at a moment’s notice.

“He understands that, ‘This is my job. When somebody comes into the office, my job is to go sit in their lap and really just be adorable,'” Krakowka said.

Charlie is hypoallergenic, meaning he’s very unlikely to cause allergic reactions in anyone. And his looks and demeanor make an immediate difference for many people who have been through horrible happenings.

“It’s a little something to take the edge off,” Krakowka said.

The fear of talking, be it to investigators or prosecutors in private or on the stand, can be intense. That’s especially so in cases involving spousal abuse or sex offenses, including those against children.

The victims in those cases are often the only ones besides the offender who know what happened.

“So imagine being a child, and now I’d like you to go into this great big courtroom in front of a judge you don’t know, in front of the person who victimized you and their attorney, who is going to ask you questions, and there’s a jury panel where you know none of them, and now I would like you to tell them about the worst thing that ever happened to you,” Krakowka said.

“That’s how daunting and scary it is for a witness to go into court and testify, and if I can make them feel a little bit better about doing that with the dog, then that's what I’m going to do.”

Charlie hasn’t actually made it into court yet, but his presence beforehand can work wonders. When Krakowka was a public defender, he had an Australian cattle dog named Helen who could do the same.

He once defended a person charged with deliberate homicide, and the only witnesses to what happened were two children, one 9 and the other 10 or 11, Krakowka said. Police couldn’t get much from them, so those interviews were brief. With Helen in the room, they opened up.

“I was able to get the kids to relax and calm down and ask them a lot more details about what happened,” Krakowka said. With that added information, the charge was reduced from deliberate homicide to negligent homicide.

“That is a difference between up to life in prison and not more than 10 or 20 years,” he said.

Howell said she spent time with Charlie outside of the courtroom before testifying in the DUI case, and even though she was still nervous when she got inside, she was able to handle it.

Still, she says, “I wish I could have had Charlie in the room with me.”

That scenario could soon play out for the first time in Butte-Silver Bow County.

District Court Judge Brad Newman has agreed to let Calhoun, a 9-year-old golden retriever-Labrador mix, sit at the feet of a young girl if she testifies in a trial set for September.

The girl says the defendant in the case sexually assaulted her. Samm Cox, the prosecutor in the case, wants Calhoun in the courtroom as a “security blanket” for the girl.

Krakowka says that makes him optimistic about the same thing happening in Anaconda-Deer Lodge County, though Charlie might need some additional time and training to emulate Calhoun.

Calhoun, a 9-year-old golden retriever-Labrador mix, might become the first “comfort dog” to accompany an alleged victim during testimony at t…

Unionized employees of St. James in Butte 'disappointed' after being asked to bargain for award

Unionized employees of St. James Healthcare say they are disappointed after being asked to bargain over contractual benefits in order to recei…

The loss of renowned chef Anthony Bourdain has struck a chord with management at the Pekin Noodle Parlor.

Greeley School was built along with many others in Butte as a response to the exploding population in the late 1890s. First through eighth gra…

POLSON — Four people have been arrested after a woman was found gravely injured on the Flathead Indian Reservation.

While summer lunch programs are good for kids, some get left out in Billings and Montana

More than 8,000 kids in Montana eat free lunch during the summer on a typical day under a federal program that aims to fight hunger while students aren't in school.

Anaconda-Deer Lodge county attorney Ben Krakowka says that Charlie, with his  big eyes and old-man eyebrows, understands that his job as a comfort dog is to be adorable and to set crime victims or witnesses at ease so they can recall events in more detail.

Ben Krakowka, the Anaconda-Deer Lodge county attorney, stands with his dog Charlie in the Anaconda County Courthouse. The 8-pound dog works with Krakowka to provide a calm presence for those who have to testify in court.