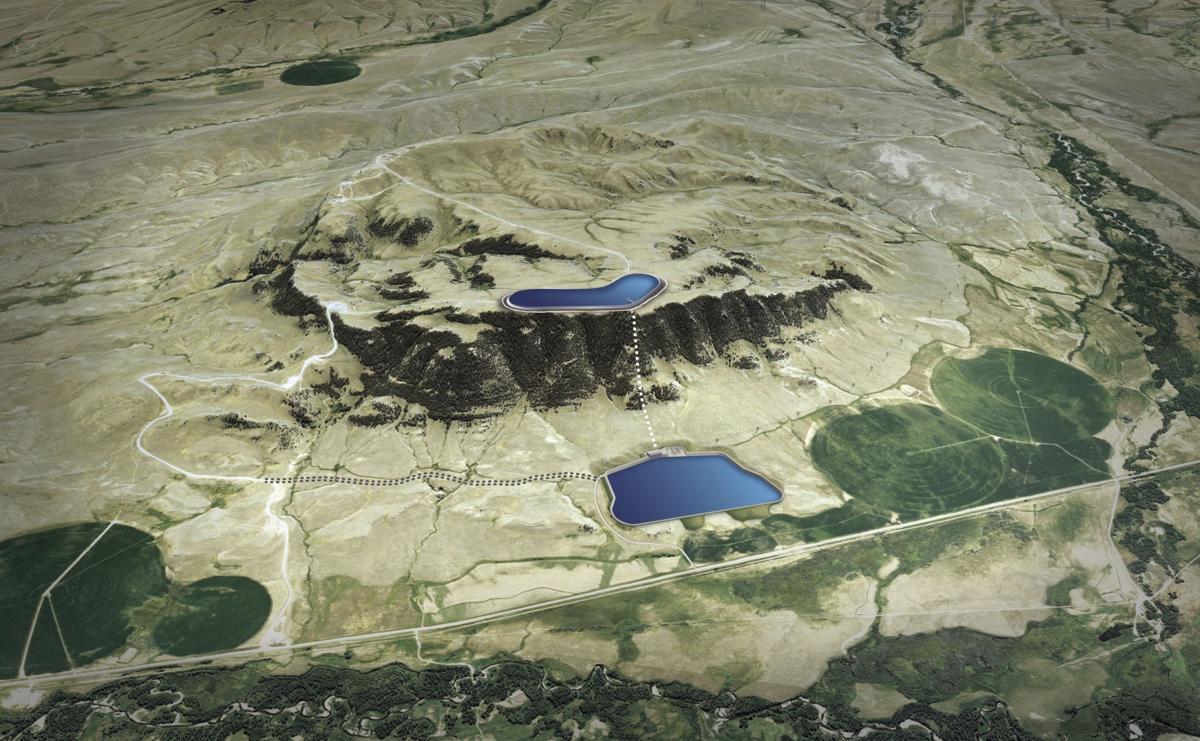 An artist rendering of the proposed Gordon Butte Pumped Storage Hydro Project is pictured here. The facility would be sited on private land in Meagher County, located 3 miles west of Martinsdale on Highway 294. The facility is composed of an upper and a lower reservoir connected by a tunnel. 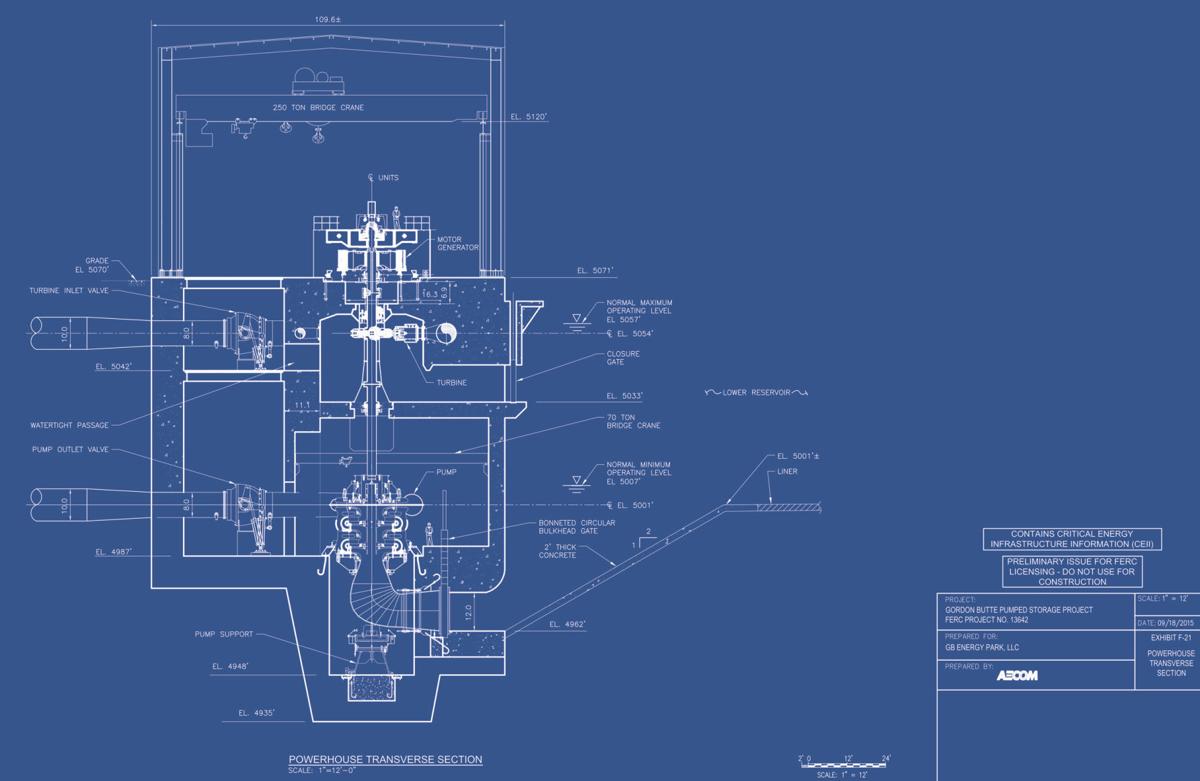 A blueprint for the turbine portion of the General Electric's ternary unit is pictured here. The device is able to switch from its pumping and generating mode at 20 megawatts per second and can even pump and generate at the same time. 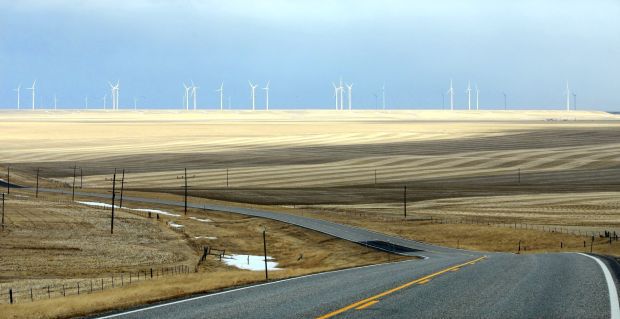 Windmills dot the horizon in this file photo.

Montana Tech is partnering with Bozeman-based Absaroka Energy, General Electric, and the U.S. Department of Energy’s National Renewable Energy Laboratory in Colorado to study the effectiveness of a new technology that could make integrating renewable energy into the nation’s grid system more streamlined.

Proponents of renewable energy have long touted the benefits of non-extractive energy sources like wind and solar, but power companies can sometimes be hesitant to integrate renewables because of the variable amounts of energy they produce. During a storm with high winds, for example, wind farms generate a lot of electricity all at once. But when the weather is stagnant, the farm might not be producing any electricity at all. This can be especially problematic for grid operators, because they need to synchronize the amount of energy produced with demand, which also changes over time.

But Absaroka is working on developing pumped storage hydro technology that could make these issues less problematic.

Absaroka and Montana Tech were recently tapped by NREL to study the effectiveness of the company’s technology as part of DOE’s HydroNEXT initiative, which was launched to facilitate hydropower technology development. DOE is dishing out $1.25 million for the 24-month study.

While pumped storage hydro might sound like a fancy term, the technology has actually been around for almost as long as the light bulb.

Its first recorded use goes back to the late 1800s, and the concept goes a bit like this: energy can be stored by pumping water from a lower elevation to a higher one and released by letting the water run downhill through a turbine.

In the case of the wind farm, for example, you can store excess energy produced during a storm by using it to pump water to a higher elevation. Then, when you want to access the energy, you can let the water flow through the turbines back to the lower elevation.

Carl Borgquist, Absaroka’s president and chief executive officer, described the system as being a bit like charging a battery.

“This technology is creating what you could think of as a battery where the storage medium is water and gravity,” he said.

Absaroka is bringing the technology into the future through what the company is calling the “Gordon Butte Pumped Storage Hydro Project.”

Seven years in the making, the project involves the company’s proposal to build a pumped storage hydro facility on private land in Meagher County, located three miles west of Martinsdale on Highway 294. The proposed facility will consist of one lower and one upper reservoir connected by a tunnel.

Nearby Cottonwood Creek will serve as the water source, though Borgquist said the facility will be a closed system that will only draw from the creek during spring runoff to make up for water lost due to evaporation. The company hopes to begin construction on the facility — which is projected to cost $900 million, take three years to build and produce 350 construction jobs — sometime next year.

Borgquist, who’s a lawyer by training, said he first came up with the idea in 2007 when one of his clients asked him to get involved in wind development.

“I started realizing that, as more renewables came onto the grid, that tools like this would be necessary to keep generation and load demand in balance,” he said.

Incidentally, Borgquist’s first idea was to use the Berkeley Pit as a lower reservoir for a hydro storage project but soon learned doing so was unfeasible. Ultimately Borgquist settled on Gordon Butte for his project, which he said has an ideal geography for pumped storage with an elevation gain of about 1,000 feet and 5.5-mile proximity to a nearby Colstrip transmission line.

But what’s makes Gordon Butte project unique isn’t just its geography. It’s also a General Electric ternary pumped-storage technology the project is using — an all-in-one unit that functions both as a pump and a turbine.

Montana Tech Electrical Engineering Assistant Professor Matt Donnelly (who, along with department head Dan Trudnowski, will be studying how well the technology performs) said what makes the ternary unit special is its speed.

According to Donnelly, the unit is able to switch from its pumping and generating mode at 20 megawatts per second and can even pump and generate at the same time. The system is so fast, Donnelly said, it’s able to help with grid stability.

Donnelly described the grid system of the United States as a massive web of inputs and outputs consisting of thousands of generators that require a careful balancing act to maintain.

Donnelly said grid stability is an area of expertise for the Electrical Engineering Department at Montana Tech. He and Trudnowski will be studying the project's impact on power system dynamics, which he described as “the study of how to keep the components interconnected, even during a worst-case scenario.”

One such worst-case scenario occurred in 2003, when a sagging power line brushed against a tree branch, which lead to a chain reaction that left 50 million people across the Northeast without power. According to Borgquist, the incident speaks to just how important grid stability can be.

Donnelly added that he believes that if Gordon Butte comes to fruition, it could poise Montana to be a leader in energy production — but not just in the form of coal production.

“Everyone in the world right now is struggling to find ways to integrate renewable technology,” he said.

Dumb mistakes you can avoid when investing

McDonald's Teams Up With Biden Admin To Promote COVID Vaccinations

McDonald's Teams Up With Biden Admin To Promote COVID Vaccinations

How you can create a steady income for retirement

How you can create a steady income for retirement

Why you should shop small and support local businesses

Why you should shop small and support local businesses

With a weekly newsletter looking back at local history.

In the 2015 documentary “Sky Line” a group of scientists proposed what seems like a pie-in-the-sky idea: an elevator to space.

NASA-bound, Tech robotics team to compete in May

Imagine a smart, miniature backhoe that runs via remote on a surface inaccessible to humans, like other planets.

When media giant Clear Channel purchased the company Montana Tech graduate Steve Radley was working for in 2011, the East Helena native was en…

An artist rendering of the proposed Gordon Butte Pumped Storage Hydro Project is pictured here. The facility would be sited on private land in Meagher County, located 3 miles west of Martinsdale on Highway 294. The facility is composed of an upper and a lower reservoir connected by a tunnel.

A blueprint for the turbine portion of the General Electric's ternary unit is pictured here. The device is able to switch from its pumping and generating mode at 20 megawatts per second and can even pump and generate at the same time.

Windmills dot the horizon in this file photo. 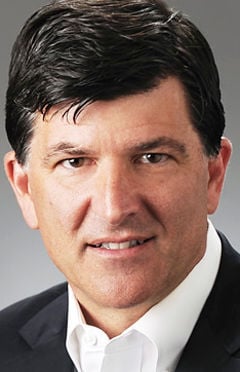 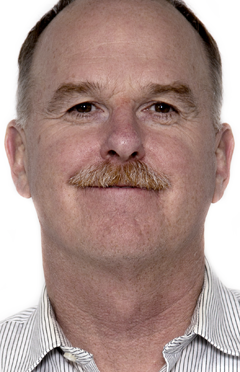 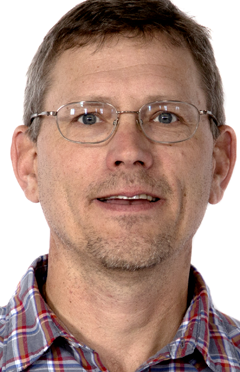