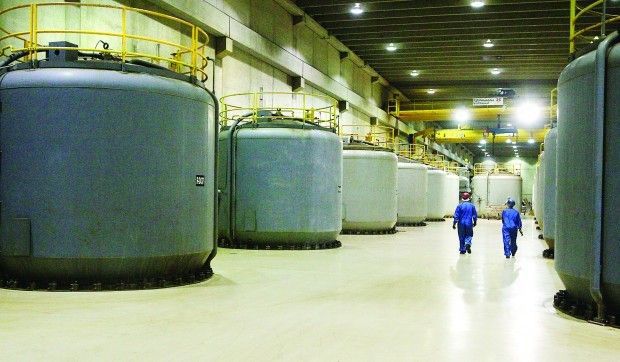 REC Silicon exports much of its production of polysilicon.

The Norway-based REC Silicon ASA has two plants in the United States. Besides the Butte plant, 10 miles west of town, the other REC Silicon is in Moses Lake, about 100 miles southwest of Spokane.

The Moses Lake plant, which produces polysilicon used in solar panels, is facing what the company calls a temporary shutdown of operation due to a trade war with China on solar panels.

Bowes said the Moses Lake employees, which number 410, will continue on at the plant doing maintenance work that normally the company would have hired contractors to do. The plant anticipates it can reopen in June.

Bowes said the company will spend the next four months selling off its existing inventory. The Moses Lake plant has "some backlog" of solar panels.

The Butte plant makes “a very small amount” of polysilicon for solar panels, so it has been unaffected by the trade war, said Francine Sullivan, vice president of development and legal for REC Silicon. Sullivan called it a “secondary product” for the Butte plant.

The Moses Lake-based plant could not access the Chinese solar panel market during the fourth quarter, which resulted in lower sales than the company previously anticipated, according to a news release.

U.S. Sen. Jon Tester, D-Montana, met with Chinese trade representatives in late January to encourage China to open up polysilicon trade for solar panels. China is the lead purchaser of solar-grade polysilicon, used to make solar panels, according to a news release from Tester’s office.

Sullivan said Tester is supportive of REC Silicon and that he is trying to help open up the solar panel market because the Moses Lake plant’s closure puts stress on the rest of the company.

“He’s certainly been very supportive of us,” Sullivan said.

Some workers at Butte's REC Silicon plant are facing uncertainty as the company announced some 70 layoffs at its Moses Lake, Wash., facility e…

No layoffs are planned at Butte’s REC Silicon in the wake of 70 jobs lost at its affiliated plant in Moses Lake, Wash., according to a spokesperson.

Butte's REC Silicon facility has laid off 30 employees as part of a cost-cutting effort, the company announced Wednesday morning.

President Donald Trump's imminent decision to impose trade protections on solar panels will have repercussions in Butte, according to REC Sili…

Face your financial anxiety by reframing your relationship to money

How to cut the cost of preventative care

How to cut the cost of preventative care

These are the best tips and tricks for donating to charity

These are the best tips and tricks for donating to charity

How to make room for fun in your monthly budget

How to make room for fun in your monthly budget

REC Silicon exports much of its production of polysilicon.