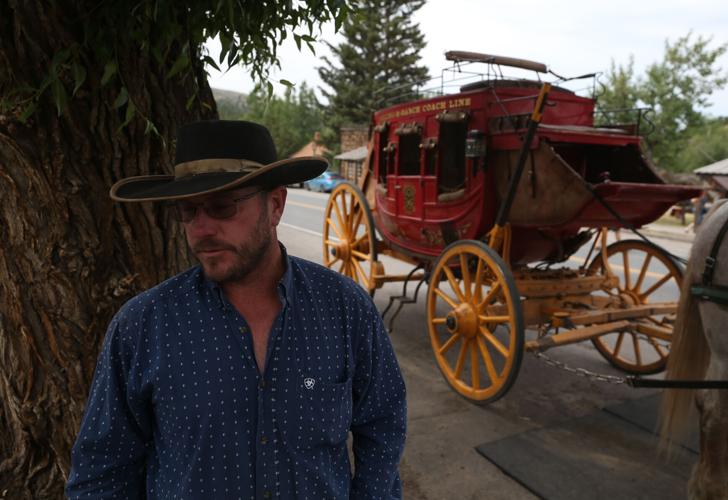 Matt Clover, of Vigilante Carriages Stagecoach Rides, speaks recently about business cross-pollination efforts in Virginia City. Several businesses in the western portion of Virginia City share business cards and recommendations for each other with visitors with the aim of increasing business for all. 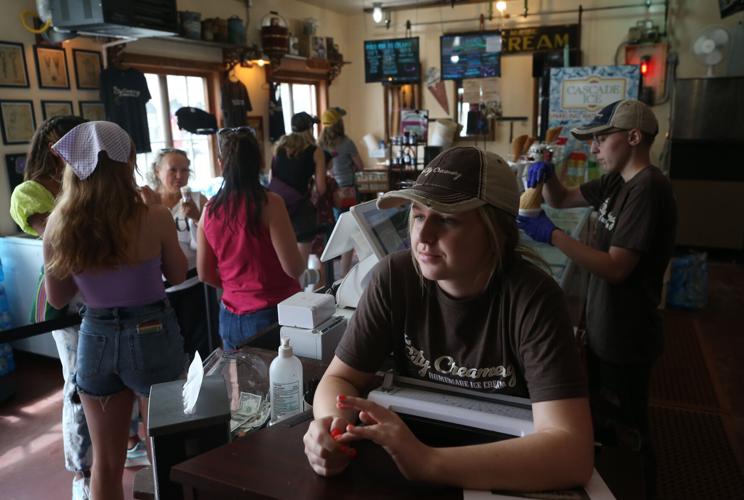 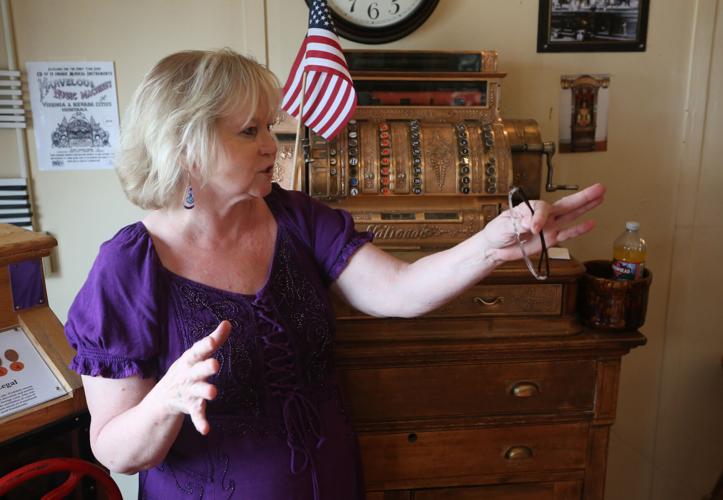 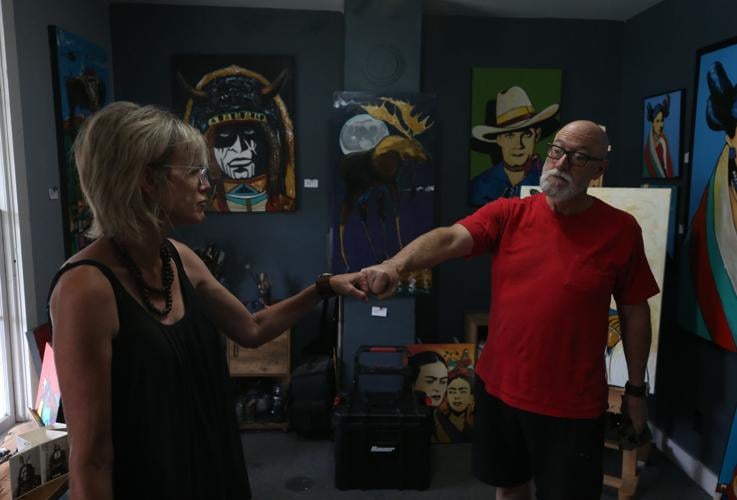 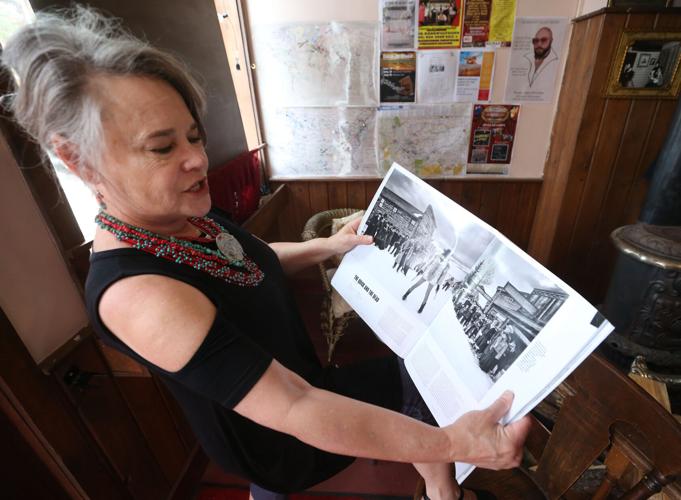 A lady friend with dark hair is thinking about you. You will receive a large sum of money soon. Your son will follow in your footsteps … . These are all things a male customer may hear from the fortune-telling gypsy at Virginia City’s Gypsy Arcade, found in the historic district.

The Gypsy Arcade is one of a handful of businesses participating in “cross pollination,” a concept where the businesses in the historic district help each other get business by word-of-mouth and, in a couple of cases, coupons.

Allyson Adams, owner of Virginia City’s Montana Picture Gallery, said the idea emerged because sometimes there’s less activity in the historic district, where her business resides, than farther up the road, specifically at and around Cousins Candy Store.

Lana Edwards, who manages the Gypsy Arcade, gives out 10% discount coupons for the Montana Picture Gallery and refers customers there and to Stephano’s, Vigilante Stageline, and other attractions in the historic district.

“Word of mouth is the best advertisement you can get,” Edwards said.

She also said she encourages people to stay overnight in Virginia City — at the Fairweather Inn, for example — rather than just making a day trip.

“Like the bees,” Adams said. “Spreading the word, flying from flower to flower, getting the word out in our own, natural ecosystem.”

Matt and Shiloh Clover, who run Vigilante Stageline, said that this year, with high gas prices and the flooding in Yellowstone, tourism in Virginia City is down, and they’ve been seeing more cancellations, particularly with their Chuck Wagon Dinner Rides.

“This year cross pollination is most important,” Matt Clover said. “Because a lot of people are canceling their reservations and taking Virginia City out of the equation entirely from their vacations.”

Before the historic district businesses started cross pollination, the Virginia City Creamery came out with the idea for all businesses in the city to come up with and name an ice cream flavor. Each week, starting on Wednesday, a new business is debuted at the store and the flavor is shared on social media and by word-of-mouth.

The Vigilante Stageline didn't choose a flavor because of time constraints.

Nicolette Turck, a manager at the creamery, said an employee last year actually came up with the idea, and it wasn’t implemented until this year.

“An employee brought it up as a way to promote businesses in town,” Turck said. “They bring business here, we send business there. No one is charging anyone.”

It started at the end of May or early June, Turck said, when the creamery sent out forms to all the businesses asking them to create an ice cream flavor and a name. The first flavor was from the Thompson-Hickman Madison County Library. Recently, they started doing two businesses per week to make sure all the businesses get a chance before the end of the summer.

“When one business succeeds, we all do,” Ashley Sutherlin said.

Major indexes like the S&P 500, the Dow Jones Industrial Average and the Nasdaq took hits. Even the British pound slumped to an all-time low against the dollar.

Should you be worried about your money? Wall Street just saw its worst week in two years

The stock market closed out a miserable September with a loss of 9.3%, the worst monthly decline since March 2020. With inflation unrelenting, is recession inevitable? Find out the latest, and get tips to protect yourself.

How much more money do you need this year to cover expenses? | PennyWise podcast

Find out how much more per month on average we're spending due to inflation on the latest episode of the PennyWise podcast.

Home prices might drop but won’t crash: What buyers should know

Whether you long to buy your first home or you own one and have considered selling, here's what falling prices could mean for you.

The 10 largest product recalls of the last decade

Recalls may involve product repairs, replacements or refunds for products taken off the market. Here's a look at the largest recalls in recent years.

5 common auto collision repairs and how much they cost

Owning a car can be expensive.

The White House wants to give the SSA an extra $1.8 billion in fiscal year 2023.

2023 Will Bring Historic Changes for Retirees on Social Security

Here's what you can expect heading into 2023.

Cuba begins to turn on lights after Ian blacks out island

Cuban officials say they've begun to restore some power after Hurricane Ian knocked out electricity to the entire island. The storm that hit with Category 3 force also devastated some of the country’s most important tobacco farms when it hit the island’s western tip and killed at least two people. The Energy and Mines Ministry announced Wednesday it had restored energy to three regions by activating two large power plants. But Havana and other parts of western Cuba remain without power. Ian hit a Cuba that has been struggling with an economic crisis and already has suffered frequent power outages

What student loan forgiveness means for you

What student loan forgiveness means for you

Matt Clover, of Vigilante Carriages Stagecoach Rides, speaks recently about business cross-pollination efforts in Virginia City. Several businesses in the western portion of Virginia City share business cards and recommendations for each other with visitors with the aim of increasing business for all.