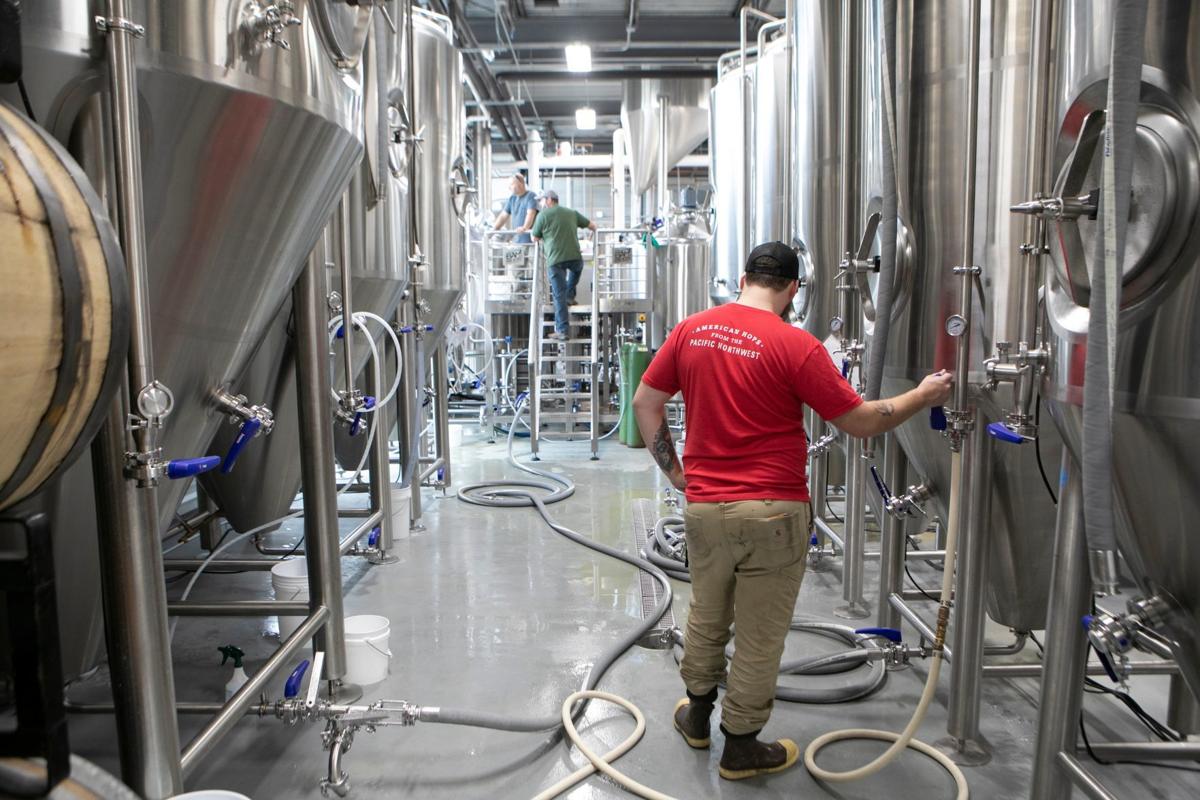 Brewer Connor Cranston works amongst fermentation tanks while brewing beer at By All Means brewery in Billings. 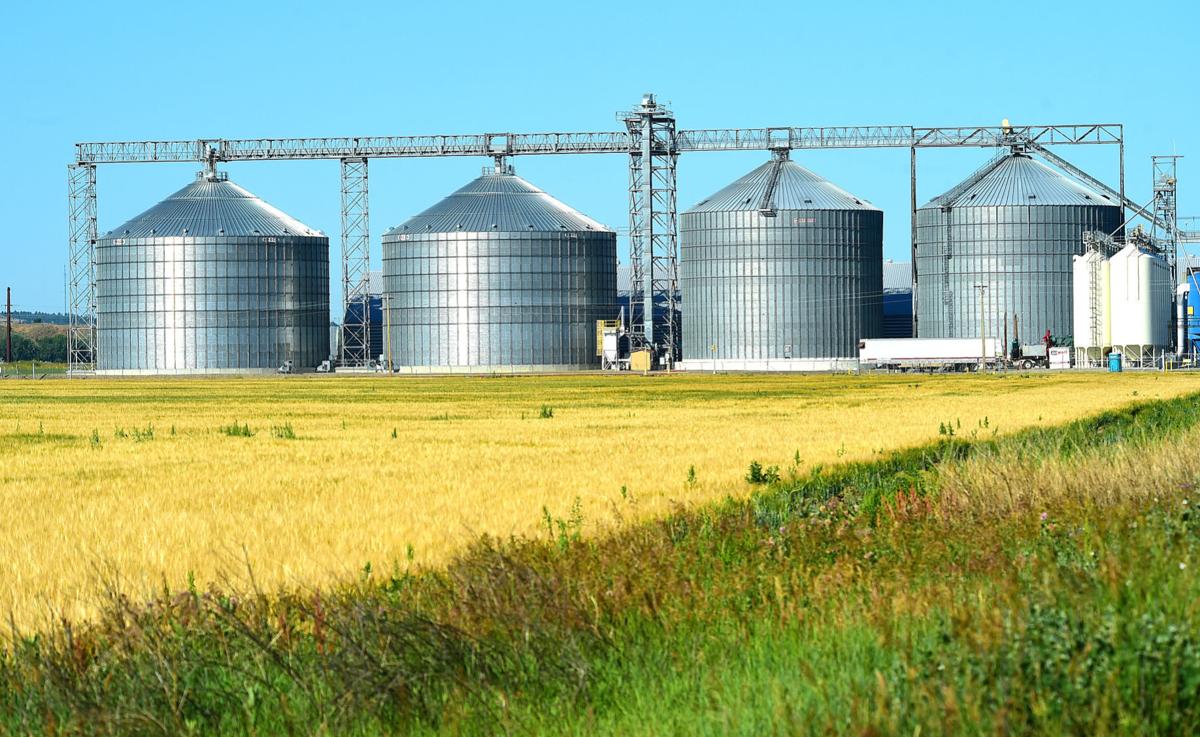 The MolsenCoors Beverage Co. barley elevator in Huntley processes and ships malt barley for Miller Coors breweries in the U.S.

A decline in beer production in the early months of the COVID-19 pandemic took a toll on Montana’s malt barley industry, which is looking for new markets to make up the difference.

Craft brewers, who buy a substantial amount of Montana malt and malt barley, cut back on beer making as U.S. tasting rooms and restaurants closed. At the time, the Mexican brewer of Corona was forced by the Mexican government to shut down.

“Almost 40% of malt barley was going to the craft market. Craft brewers, and most of them were the small tasting rooms, were shut down," said Buzz Mattelin, a Culbertson-area farmer and president of the National Barley Growers Association. "So, any of the malt houses that were dealing mainly with craft are hurting pretty badly, and it translates a little bit into what future demand is."

At the same time craft brewers were dialing down operations, the Mexican government shut down nonessential businesses, including breweries, as it attempted to slow the spread of COVID-19. Constellation Brands, which markets Mexican beer in the United States, began buying less Montana malt as a result.

U.S. sales of beer in bottles and cans were a different story, as consumers pivoted from bars and taprooms to drinking at home, Mattelin said. A May report by marketing surveyor Nielson on U.S. alcohol purchases showed beer purchases at brick-and-mortar stores up 21% through the first seven weeks of the pandemic, compared to the same period a year earlier. Online sales of alcohol were up 238% from the same period the previous year, Nielson reported. Likewise, sales of 30-packs of beer had increased 20.9% for the period, while sales of 24-packs were up 19.8%. Six-pack sales were down 2%.

But customers at bars and restaurants pay more for alcohol than consumers pulling sport packs from a refrigerated case, Nielson estimated that off-premise purchases of alcohol of all kinds would have to increase 22% for the alcohol industry to recover.

For Montana malt barley farmers looking for new customers, China is a potential landing spot, said Cassidy Marn, Montana Wheat and Barley Committee executive vice president. China brewers usually buy their malting barley from Australia, which, as with most grains sold in the Asian Pacific region, is Montana’s biggest competitor when it comes to barley.

But China slapped an 80.5% tariff on Australian barley in mid-May, accusing Australia of dumping the commodity in the China market. The tariff will last five years. There could be opportunity for Montana malt barley to sell into China as a cheap alternative to Australia, Marn said.

“China put the tariffs on Australia. So, they’re super short and have a need for malt barley right now,” Marn said. “There is potential that open market could have a home. I know several companies have been working to sort that out.”

What could make Montana malt barley sales to China possible is the phase-one trade deal between China and the United States. Signed by President Donald Trump and Chinese Vice Premier Liu He in January, the trade deal requires $40 billion in U.S. agricultural goods and other products over the next two years.

To get U.S. barley moving into China, the United States must first certify a handling facility, which China must also approve, among other things, Marn said. It will take time to work out the details.

“It’s just brand new. They’re working on it now and hopefully it will be ready by harvest when we have some extra barley,” Marn said.

Montana was the No. 1 state for barley acres planted at more than 1 million acres, according to the U.S. Department of Agriculture’s 2020 Plantings Report published Tuesday. The state had twice as many barley acres as North Dakota, the second largest barley state by acreage.

With a weekly newsletter looking back at local history.

Senior Solutions: Butte business believes home is where the heart is

Payment apps have surged in popularity, but can you really trust them?

Like over-the-counter medicines, payment apps can be safe when used as directed — but people often don’t read the directions. Here are some tips.

No masks, no distance: Pandemic wedding horrors for vendors

NEW YORK (AP) — Wedding planners, photographers and other bridal vendors who make the magic happen have a heap of new worries in the middle of the pandemic: no-mask weddings, rising guest counts and venues not following the rules.

WASHINGTON (AP) — The Trump administration is taking steps to give telehealth a broader role under Medicare, with an executive order that serves as a call for Congress to make doctor visits via personal technology a permanent fixture of the program.

While investors have endured stomach-jolting ups and downs since the coronavirus pandemic struck, one of the world’s oldest commodities has been on a steady rise: gold. The price of gold…

Super Savings! Here Are Some Crazy Ways You Can Save Money!

Super Savings! Here Are Some Crazy Ways You Can Save Money!

How to Build Up Your Credit from Nothing

How to Build Up Your Credit from Nothing

Brewer Connor Cranston works amongst fermentation tanks while brewing beer at By All Means brewery in Billings.

The MolsenCoors Beverage Co. barley elevator in Huntley processes and ships malt barley for Miller Coors breweries in the U.S.